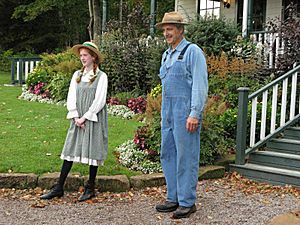 Actors at the Anne of Green Gables Museum on Prince Edward Island, Canada. After it was published in 1908, the story of the orphaned Anne, and how the Cuthberts adopted her, has been widely popular in the English-speaking world. Later, its popularity spread to Asia as well

Adoption is the legal act of permanently placing a child with a parent or parents other than the birth parents. Adoption usually results in the severing of the parental responsibilities and rights of the biological parents and the placing of those responsibilities and rights onto the adoptive parents. After the finalization of an adoption, there is no legal difference between biological and adopted children, although there is a world of difference outside of the legal world.

Different jurisdictions have varying laws on adoption and post-adoption. Some practise closed adoption, preventing further contact between the adopted person and the biological parents, while others have varying degrees of open adoption, which may allow such contact.

Joint adoption by same-sex couples is legal in 26 countries. 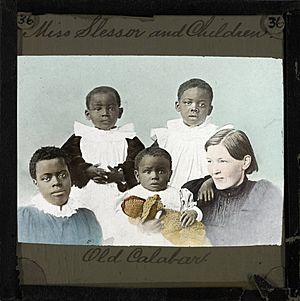 Mary Slessor was a Scottish missionary known for her work in Africa, where she adopted abandoned children

Most children are placed for adoption as a result of the biological parents' decision that they are unable to adequately care for a child. Rarer are cases in which biological parents have lost their responsibilities and rights due to neglect or abuse. A small percentage of children who were adopted have been orphaned because of the death of their biological parents.

In some cases, parents' rights have been terminated when their outgroup culture has been deemed unfit by the controlling government. Aboriginal Peoples in Australia were affected by such policies, as were Native Americans in the United States and Canada.

Adoption agencies can range from government-funded agencies that place children at little cost, to lawyers who arrange private adoptions, to international commercial and non-profit agencies. Adoptive parents can pay from nothing to US$20,000 for an adoption, with private adoptions generally costing more. Infants are more commonly sought than toddlers or older children, and adoptive parents often seek the same race. 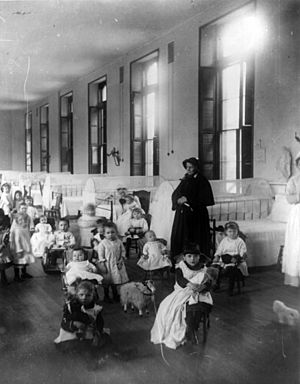 Sister Irene is among the pioneers of modern adoption, establishing a system to board out children rather than institutionalize them

Adoptions can occur either between related family members, or unrelated individuals. Historically, most adoptions occurred within a family. The most recent data from the U.S. indicates about half of adoptions are currently between related individuals. A common example of this is a "step-parent adoption", where the new partner of a parent may legally adopt a child from the parent's previous relationship.

Infertility is the main reason parents seek to adopt children they are not related to. One study shows this accounted for 80% of unrelated infant adoptions and half of adoptions through foster care. Estimates suggest that 11–24% of Americans who cannot conceive or carry to term attempt to build a family through adoption. 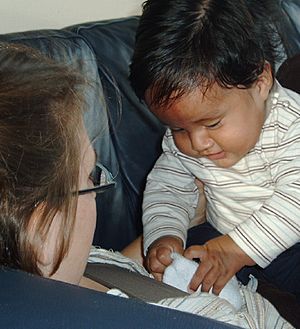 Other reasons people adopt are numerous , these may include wanting to cement a new family following divorce or death of one parent, compassion motivated by religious or philosophical conviction, to avoid contributing to overpopulation out of the belief that it is more responsible to care for otherwise parent-less children than to reproduce, to ensure that inheritable diseases are not passed on, and health concerns relating to pregnancy and childbirth.

Although there are a range of possible reasons, the most recent study of experiences of women who adopt suggests they are most likely to be 40–44 years of age, currently married, have impaired fertility, and childless.

Many adopted people and biological parents who were separated by adoption have a natural desire to reunite. In countries which practise closed adoption, this desire has led to efforts to open sealed records and efforts to establish the right of those adopted to access their sealed records.

All content from Kiddle encyclopedia articles (including the article images and facts) can be freely used under Attribution-ShareAlike license, unless stated otherwise. Cite this article:
Adoption Facts for Kids. Kiddle Encyclopedia.