Josephine Baker (born Freda Josephine McDonald; 3 June 1906 – 12 April 1975) was an American-born French entertainer, activist, and French Resistance agent. Her career was centered primarily in Europe, mostly in her adopted France. During her early career she was renowned as a dancer, and was among the most celebrated performers to headline the revues of the Folies Bergère in Paris. Her performance in the revue Un vent de folie in 1927 caused a sensation in Paris. Her costume, consisting of only a girdle of bananas, became her most iconic image and a symbol of the Jazz Age and the 1920s.

Baker was celebrated by artists and intellectuals of the era, who variously dubbed her the "Black Pearl", the "Bronze Venus", and the "Creole Goddess". Born in St. Louis, Missouri, she renounced her U.S. citizenship and became a French national after her marriage to French industrialist Jean Lion in 1937. She raised her children in France. "I have two loves," the artist once said, "my country and Paris."

Baker was the first person of color to become a worldwide entertainer and to star in a major motion picture, the 1934 Marc Allégret film Zouzou.

Baker refused to perform for segregated audiences in the United States and is noted for her contributions to the Civil Rights Movement. In 1968 she was offered unofficial leadership in the movement in the United States by Coretta Scott King, following Martin Luther King Jr.'s assassination. After thinking it over, Baker declined the offer out of concern for the welfare of her children.

She was also known for aiding the French Resistance during World War II. After the war, she was awarded the Croix de guerre by the French military, and was named a Chevalier of the Légion d'honneur by General Charles de Gaulle. 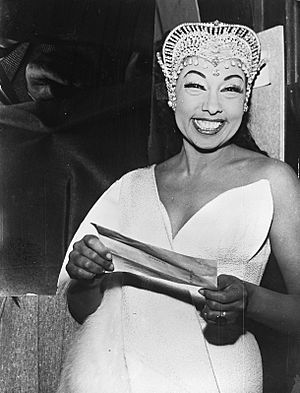 In her later years, Baker converted to Roman Catholicism.

On 8 April 1975, Baker starred in a revue at the Bobino in Paris, Joséphine à Bobino 1975, celebrating her 50 years in show business. The revue, financed notably by Prince Rainier, Princess Grace, and Jacqueline Kennedy Onassis, opened to rave reviews. Demand for seating was such that fold-out chairs had to be added to accommodate spectators. The opening night audience included Sophia Loren, Mick Jagger, Shirley Bassey, Diana Ross, and Liza Minnelli.

Four days later, Baker was found lying peacefully in her bed surrounded by newspapers with glowing reviews of her performance. She was in a coma after suffering a cerebral hemorrhage. She was taken to Pitié-Salpêtrière Hospital, where she died, aged 68, on 12 April 1975.

She received a full Roman Catholic funeral that was held at L'Église de la Madeleine. The only American-born woman to receive full French military honors at her funeral, Baker's funeral was the occasion of a huge procession. After a family service at Saint-Charles Church in Monte Carlo, Baker was interred at Monaco's Cimetière de Monaco. 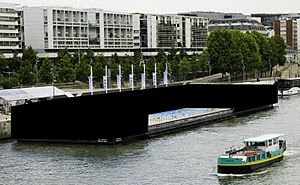 Place Joséphine Baker in the Montparnasse Quarter of Paris was named in her honor. She has also been inducted into the St. Louis Walk of Fame, and on 29 March 1995, into the Hall of Famous Missourians.

In 2015 she was inducted into the Legacy Walk in Chicago, Illinois, USA. The Piscine Joséphine Baker is a swimming pool along the banks of the Seine in Paris named for her.

Darren Royston, historical dance teacher at RADA credited Baker with being the Beyoncé of her day, and bringing the Charleston to Britain. Two of Baker's sons, Jean-Claude and Jarry (Jari), grew up to go into business together, running the restaurant Chez Josephine on Theatre Row, 42nd Street, New York City. It celebrates Baker's life and works. 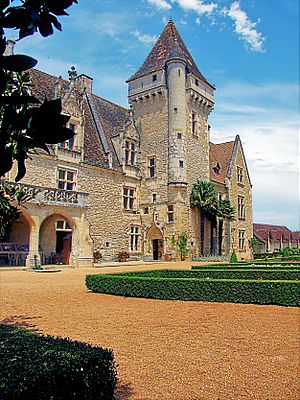 Château des Milandes, a castle near Sarlat in the Dordogne, was Baker's home where she raised her twelve children. It is open to the public and displays her stage outfits including her banana skirt (of which there are apparently several). It also displays many family photographs and documents as well as her Legion of Honour medal. Most rooms are open for the public to walk through.

Baker continued to influence celebrities more than a century after her birth. In a 2003 interview with USA Today, Angelina Jolie cited Baker as "a model for the multiracial, multinational family she was beginning to create through adoption". Beyoncé performed Baker's banana dance at the Fashion Rocks concert at Radio City Music Hall in September 2006.

On 3 June 2017, the 111th anniversary of her birth, Google released an animated Google Doodle, which consists of a slideshow chronicling her life and achievements.

All content from Kiddle encyclopedia articles (including the article images and facts) can be freely used under Attribution-ShareAlike license, unless stated otherwise. Cite this article:
Josephine Baker Facts for Kids. Kiddle Encyclopedia.