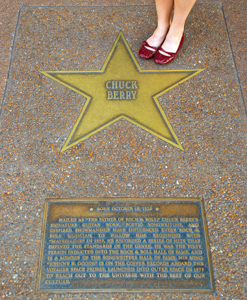 Chuck Berry's star in the St. Louis Walk of Fame

The St. Louis Walk of Fame honors notable people from St. Louis, Missouri, who made contributions to the culture of the United States. All inductees were either born in the Greater St. Louis area or spent their formative or creative years there. Contribution can be in any area; most of the current inductees made their achievements in acting, entertainment, music, sports, art/architecture, broadcasting, journalism, science/education and literature.

As of April 2019[update], the walk has more than 150 brass stars and bronze plaques, each bearing an inscription of an inductee's name and a summary of his or her accomplishments. The stars and plaques are set into the sidewalks along a 2⁄3-mile (1 km) stretch of Delmar Boulevard in the Delmar Loop area, spanning the border between St. Louis and University City.

The walk was founded by developer Joe Edwards, owner of Blueberry Hill pub/restaurant and other establishments located along the walk. Its first stars and plaques were installed in 1989; the inductees that year were musician Chuck Berry, dancer and choreographer Katherine Dunham, bridge builder James B. Eads, poet T. S. Eliot, ragtime composer Scott Joplin, aviator Charles Lindbergh, baseball player Stan Musial, actor Vincent Price, newspaper publisher Joseph Pulitzer and playwright Tennessee Williams. Ten more were selected for each of the next four years (in order to get the walk established), but starting in 1994 no more than three have been awarded in any year.

In May 2008, Cedric the Entertainer received the first star and plaque located in the City of St. Louis portion of the loop. The walk (and the boundaries of the Delmar Loop in general) has been expanded eastward by Edwards in recent years as Edwards continues to invest in the area's redevelopment.

Anyone can submit a nomination by mail by supplying basic identification information as well as a description of the nominee's accomplishments and connection to St. Louis. About 30 to 40 finalists are culled from the nominees by the walk's founder and director; the finalists are sent to a selection committee of 120 St. Louisans. The selection committee has been variously described as:

Prior to 2007, the open-air induction ceremony was held regularly on the third week of May; since then, it is held on a less regular basis, subject to the availability of those being inducted.

Some of the walk's inductees, including Dick Gregory, Jackie Joyner-Kersee, and Ozzie Smith, are also in the nearby, unrelated Gateway Classic Hall of Fame.

All content from Kiddle encyclopedia articles (including the article images and facts) can be freely used under Attribution-ShareAlike license, unless stated otherwise. Cite this article:
St. Louis Walk of Fame Facts for Kids. Kiddle Encyclopedia.