Maya Angelou, born Marguerite Ann Johnson (April 4, 1928 – May 28, 2014), was an American author and poet. She published seven autobiographies, three books of essays, and several books of poetry. Maya took part in several plays, movies, and television shows spanning more than fifty years. She received dozens of awards and over thirty honorary doctoral degrees. Angelou is best known for her series of seven autobiographies, which focus on her childhood and early adult experiences. The first, I Know Why the Caged Bird Sings (1969), tells of her life up to the age of seventeen and made her famous.

In I Know Why the Caged Bird Sings, Angelou publicly discussed aspects of her personal life. She was respected as a spokesperson of black people and women, and her works have been considered a defense of black culture. People have tried to ban her books from some US libraries, but her works are used in schools and universities worldwide. Angelou's major works have been labeled as autobiographical fiction, but many critics have characterized them as autobiographies. She tried to challenge the common structure of the autobiography by critiquing, changing, and expanding the genre. Her books center on themes such as racism, identity, family, and travel. Angelou is best known for her autobiographies, but she was also an established poet.

Angelou was born in St. Louis, Missouri, the second child of Bailey Johnson, a doorman and navy dietitian, and Vivian (Baxter) Johnson, a nurse and card dealer. When Angelou was three her parents' marriage ended, and her father sent her and her siblings to Stamps, Arkansas, alone by train, to live with their paternal grandmother Annie Henderson. Angelou's grandmother prospered financially during the Great Depression and World War II, which was rare for African Americans of the time. The general store she owned sold necessary basic commodities and she "made wise and honest investments." 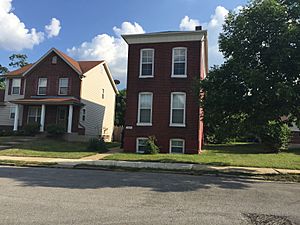 Four years later, the children's father came and returned them to their mother's care in St. Louis. At the age of eight, while living with her mother, Angelou was badly hurt by her mother's boyfriend. Shortly after Maya told her family about it, the man was shot and killed. Angelou became mute for almost five years, believing that "her voice killed him." It was during this period of silence that Angelou developed her extraordinary memory, her love for books and literature, and her ability to listen and observe the world around her.

After her mother's boyfriend was killed, Angelou and her brother were sent back to their grandmother. Angelou credits a teacher and friend of her family, Mrs. Bertha Flowers, with helping her speak again. Flowers introduced her to authors such as Charles Dickens, William Shakespeare, Edgar Allan Poe, Douglas Johnson, and James Weldon Johnson. These authors would affect her life and career as well as other black female artists like Frances Harper, Anne Spencer, and Jessie Fauset.

When Angelou was 14, she and her brother moved in with their mother once again, who had since moved to Oakland, California. During World War II, Angelou attended the California Labor School. Before graduating, she worked as the first black female streetcar conductor in San Francisco. 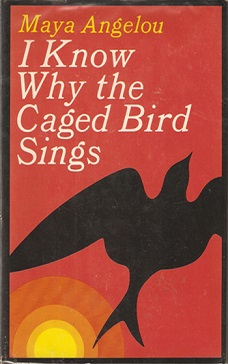 Before becoming a poet and writer, Angelou tried other occupations as a young adult. Maya worked as a fry cook, a dancer and performer, a cast member of the opera Porgy and Bess, coordinator for the Southern Christian Leadership Conference, and a journalist in Egypt and Ghana during the days of decolonization. She was an actor, writer, director, and producer of plays, movies, and public television programs.

Starting in 1982, she taught at Wake Forest University in Winston-Salem, North Carolina, where she held the first lifetime Reynolds Professorship of American Studies. She was active in the Civil Rights Movement and worked with Martin Luther King, Jr. and Malcolm X.

During the 1990s she made approximately eighty appearances a year as a lecturer, something she continued into her eighties. In 1993, Angelou recited her poem "On the Pulse of Morning" at President Bill Clinton's inauguration. She was the first poet to make an inaugural recitation since Robert Frost at John F. Kennedy's inauguration in 1961. 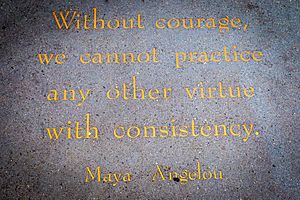 Angelou died on the morning of May 28, 2014, according to a family statement. She was found by her caregiver. She had reportedly been in poor health and had canceled recent scheduled appearances. Angelou died in her home in Winston-Salem, North Carolina of natural causes at the age of 86.

Tributes were paid by Barack Obama, who called her "one of the brightest lights of our time" and "a brilliant writer, a fierce friend, and a truly phenomenal woman" and Bill Clinton, who described her works as "gifts of wisdom and wit, courage, and grace." Harold Augenbraum, from the National Book Foundation, said that Angelou's "legacy is one that all writers and readers across the world can admire and aspire to." 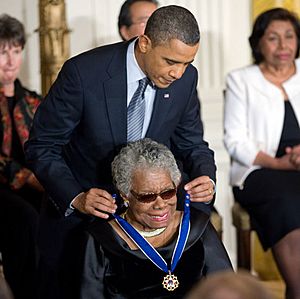 Angelou was honored by universities, literary organizations, government agencies, and special interest groups. Her honors included a Pulitzer Prize nomination for her book of poetry, Just Give Me a Cool Drink of Water 'fore I Diiie, a Tony Award nomination for her role in the 1973 play Look Away, and three Grammys for her spoken word albums. She served on two presidential committees and was awarded the National Medal of Arts in 2000, the Lincoln Medal in 2008, and the Presidential Medal of Freedom in 2011. Angelou was awarded over thirty honorary degrees.

All content from Kiddle encyclopedia articles (including the article images and facts) can be freely used under Attribution-ShareAlike license, unless stated otherwise. Cite this article:
Maya Angelou Facts for Kids. Kiddle Encyclopedia.