Schomburg Center for Research in Black Culture facts for kids

The Schomburg Center for Research in Black Culture is a research library of the New York Public Library (NYPL) and an archive repository for information on people of African descent worldwide. Located at 515 Malcolm X Boulevard (Lenox Avenue) between West 135th and 136th Streets in the Harlem neighborhood of Manhattan, New York City, it has, almost from its inception, been an integral part of the Harlem community. It is named for Afro-Puerto Rican scholar Arturo Alfonso Schomburg.

The resources of the Center are broken up into five divisions, the Art and Artifacts Division, the Jean Blackwell Hutson General Research and Reference Division, the Manuscripts, Archives and Rare Books Division, the Moving Image and Recorded Sound Division, and the Photographs and Prints Division.

In addition to research services, the center hosts readings, discussions, art exhibitions, and theatrical events. It is open to the general public.

In 1901, Andrew Carnegie tentatively agreed to donate $5.2 million (equivalent to $169,374,400 in 2021) to construct 65 branch libraries in New York City, with the requirement that the City provide the land and maintain the buildings once construction was complete. Later in 1901 Carnegie formally signed a contract with the City of New York to transfer his donation to the city to then allow it to justify purchasing the land to house the libraries. McKim, Mead & White were chosen as the architects and Charles Follen McKim designed the three-story library building at 103 West 135th Street in the Italian Renaissance Palazzo mode. At its opening on July 14, 1905, the library had 10,000 books and the librarian in charge was Gertrude Cohen. 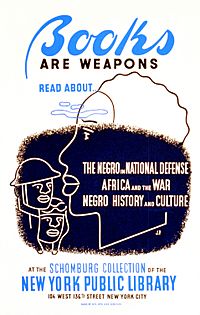 In 1920, Ernestine Rose, a white woman born in Bridgehampton in 1880, became the branch librarian. She quickly integrated the all-white library staff. Catherine Allen Latimer, the first African-American librarian hired by the NYPL, was sent to work with Rose as was Roberta Bosely

In 1921, the library hosted the first exhibition of African-American art in Harlem; it became an annual event. The library became a focal point to the burgeoning Harlem Renaissance. In 1923, the 135th Street branch was the only branch in New York City employing Negroes as librarians, and consequently when Regina M. Anderson was hired by the NYPL, she was sent to work at the 135th Street branch.

Rose issued a report to the American Library Association, in 1923, which stated that requests for books about Negroes or written by Negroes had been increasing, and that the demand for professionally trained colored librarians was also. In late 1924, Rose called a meeting, with attendees including Arturo Alfonso Schomburg, James Weldon Johnson, Hubert Harrison, that decided to focus on preserving rare books, and solicit donations to enhance its African-American collection. On May 8, 1925, it began operating as the Division of Negro Literature, History and Prints, a division of the NYPL. In 1926, Schomburg was interested in selling his collection of African-American literature because he wanted it to be available to the general public, but he wanted the collection to stay in Harlem. Rose and the National Urban League convinced the Carnegie Foundation to pay $10,000 to Schomburg and then donate the books to the library. In 1926, the center's collection won acclaim with the addition of Schomburg's personal collection. By donating his collection, Schomburg sought to show that black people had a history and a culture and thus were not inferior to other races. About 5,000 objects in Schomburg's collection were donated.

In 1929, Anderson was desirous of a promotion and enlisted the help of W. E. B. Du Bois and Walter Francis White when she was being discriminated against by not being promoted. After letters of intervention on her behalf by Du Bois and White, and a boycott of the library by White, Anderson was promoted and transferred to the Rivington Street branch of the NYPL.

By 1930, the Center had 18,000 volumes. In 1932, Schomburg became the first curator of his collection, until his death in 1938. In 1935, the Center developed a project to deliver books once a week to those handicapped severely enough that they could not make it to the library. Dr. Lawrence D. Reddick became the second curator of the Schomburg Collection of Negro Literature. At the behest of Reddick, in October 1940, the entire Division of Negro History, Literature and Prints was renamed the Schomburg Collection of Negro History and Literature.

In 1942 Rose retired after an extension was built onto the rear of the building, at a time when the library had 40,000 books. Dorothy Robinson Homer replaced her as Branch Librarian, after the Citizen's Committee of the 135th Street Branch Library specifically requested a Negro to replace Rose.

Homer created a room of books just for young adults and created the American Negro Theatre in the basement that spawned the play Anna Lucasta, which was moved to Broadway. She kept the emphasis on building a community center for art, music and drama. She put on art exhibits that favored unknown, young artists of all races.

After the outbreak of WWII, Homer started a program of monthly concert recitals in the auditorium to enhance public spirit, but the demand by performers and audience members to continue the practice made it permanent.

In 1948, Jean Blackwell, later Jean Blackwell Hutson, was named the director of the Center. In a 1966 speech, Hutson warned of the perilous status of the Schomburg collection.

In 1971, the Center began being supported by the privately funded Schomburg Corporation. The next year, funds by New York City were allocated to renovate the building at 103 West 135th, and it was renamed the building of the Schomburg Collection for Research in Black Culture. Simultaneously, the entire Schomburg collection was rounded up from various branch libraries and transferred to the Center. In 1972, it was designated as one of NYPL's research libraries. 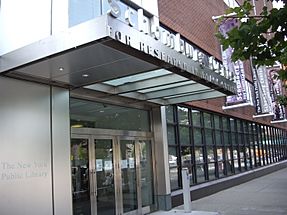 The entrance to the Center

In 1980, a new Schomburg Center was founded at 515 Lenox Avenue. In 1981, the original building on West 135th Street which held the Schomburg Collection was designated a New York City Landmark. In 2016, both the original and current buildings, now joined by a connector, were designated a National Historic Landmark.

In 1981, Wendell L. Wray became the director of the Center. Protests began over Wray's decision to not hire an African-American man to head the Center's Manuscript, Archives, and Rare Books Division and instead hired Robert Morris. In 1983, Wray resigned to pursue academic research and Catherine Hooker was named acting director.

Howard Dodson became the director in 1984, at a time when the Schomburg was primarily a cultural center visited by tourists and schoolchildren and its research facilities were known only to scholars. In 1984, the Schomburg's collection was at 5 million. In 1984 attendance was 40,000 a year. As early as 1984, the Schomburg was recognized as the most important institution in the world for collections of art and literature of people in Africa or its diaspora. In 1983, a scholars-in-residence program started at the center. In 1986, an exhibit entitled Give me your poor... sparked controversy. In March 1987, a public funding campaign was started to raise money to renovate the old library and to enhance the new Center's housing and its functions.

In 1991, completion of additions to the Schomburg Center were completed. The new center on Malcolm X was expanded to include an auditorium and a connection to the old landmark building on 135th. In 2005, the center held an exhibition of letters, photographs and other material related to Malcolm X. In 2007, the building was renovated and expanded in an $11 million project. The Schomburg Center had 120,000 visitors a year; by 2010, Dodson announced he would retire in early 2011.

In 2007, the Schomburg Center was one of the sponsors of the African Burial Ground National Monument.

Following Howard Dodson's announcement of his retirement in 2010, Khalil Gibran Muhammad, great-grandson of Elijah Muhammad and professor of history at Indiana University, was announced as Dodson's replacement. In the summer of 2011, Muhammad became the fifth director of the Schomburg. His stated goals were for the Schomburg to be a focal point for young adults and to collaborate with the local community, to not only reinforce its pride, but also for the Center to be a gateway for revealing the history of Black people worldwide. In July, the Center began an exhibit of Malcolm X footage and prints entitled Malcolm X: the Search for Truth.

On August 1, 2016, the New York Public Library announced that poet and academic Kevin Young would begin as the Director in the "late fall" of 2016. 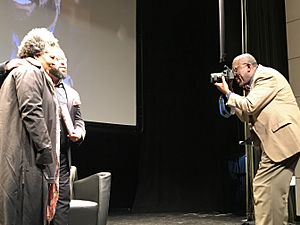 The Schomburg Collection was considered, in 1998, as consisting of the rarest, and most useful, Afrocentric artifacts of any public library in the United States. The Center's collection includes documents signed by Toussaint Louverture and a rare recording of a speech by Marcus Garvey.

The Center also acts as the literary representative of the heirs of Claude McKay.

All content from Kiddle encyclopedia articles (including the article images and facts) can be freely used under Attribution-ShareAlike license, unless stated otherwise. Cite this article:
Schomburg Center for Research in Black Culture Facts for Kids. Kiddle Encyclopedia.