Phillis Wheatley Peters, also spelled Phyllis and Wheatly (c. 1753 – December 5, 1784) was the first African-American author of a published book of poetry. Born in West Africa, she was sold into slavery at the age of seven or eight and transported to North America. She was enslaved by the Wheatley family of Boston. After she learned to read and write, they encouraged her poetry when they saw her talent.

On a 1773 trip to London with her master's son, seeking publication of her work, Wheatley met prominent people who became patrons. The publication in London of her Poems on Various Subjects, Religious and Moral on September 1, 1773, brought her fame both in England and the American colonies. Figures such as George Washington praised her work. A few years later, African-American poet Jupiter Hammon praised her work in a poem of his own.

Wheatley was emancipated by her masters shortly after the publication of her book. They soon died, and she married poor grocer John Peters, lost three children, and died in poverty and obscurity at the age of 31. 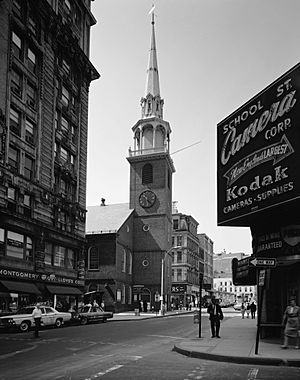 Although the date and place of her birth are not documented, scholars believe that Phillis Wheatley was born in 1753 in West Africa, most likely in present-day Gambia or Senegal. She was sold by a local chief to a visiting trader, who took her to Boston in the British Colony of Massachusetts, on July 11, 1761, on a slave ship called The Phillis. It was owned by Timothy Fitch and captained by Peter Gwinn.

On arrival in Boston, she was enslaved by John Wheatley, a wealthy Boston merchant and tailor, who bought the young girl as a slave for his wife Susanna. John and Susanna Wheatley named her Phillis, after the ship that had transported her to America. She was given their last name of Wheatley, as was a common custom if any surname was used for enslaved people.

The Wheatleys' 18-year-old daughter, Mary, was Phillis's first tutor in reading and writing. Their son, Nathaniel, also helped her. John Wheatley was known as a progressive throughout New England; his family afforded Phillis an unprecedented education for an enslaved person, and one unusual for a woman of any race. By the age of 12, she was reading Greek and Latin classics in their original languages, as well as difficult passages from the Bible. At the age of 14, she wrote her first poem, "To the University of Cambridge [Harvard], in New England". Recognizing her literary ability, the Wheatley family supported Phillis's education and left household labor to their other domestic enslaved workers. The Wheatleys often showed off her abilities to friends and family. Strongly influenced by her readings of the works of Alexander Pope, John Milton, Homer, Horace, and Virgil, Phillis began to write poetry.

In 1773, at the age of 20, Phillis accompanied Nathaniel Wheatley to London in part for her health (she suffered from chronic asthma), but largely because Susanna believed Phillis would have a better chance of publishing her book of poems there. She had an audience with Frederick Bull, the Lord Mayor of London and other significant members of British society. (An audience with King George III was arranged, but Phillis returned to Boston before it could take place.) Selina Hastings, Countess of Huntingdon, became interested in the talented young African woman and subsidized the publication of Wheatley's volume of poems, which appeared in London in the summer of 1773. As Hastings was ill, she and Phillis never met.

After her book was published, by November 1773, the Wheatleys emancipated Phillis. Her former enslaver Susanna died in the spring of 1774, and John in 1778. Shortly after, Wheatley met and married John Peters, a free black grocer. They lived in poor conditions and two of their babies died.

John was improvident and was imprisoned for debt in 1784. With a sickly infant son to provide for, Phillis became a scullery maid at a boarding house, work she had not done before. She died on December 5, 1784, at the age of 31. Her infant son died soon after.

Phillis Wheatley wrote a letter to Reverend Samson Occom, commending him on his ideas and beliefs stating that enslaved people should be given their natural-born rights in America. Wheatley also exchanged letters with the British philanthropist John Thornton, who discussed Wheatley and her poetry in correspondence with John Newton. Along with her poetry, she was able to express her thoughts, comments and concerns to others.

In 1775, she sent a copy of a poem entitled "To His Excellency, George Washington" to the then-military general. The following year, Washington invited Wheatley to visit him at his headquarters in Cambridge, Massachusetts, which she did in March 1776. Thomas Paine republished the poem in the Pennsylvania Gazette in April 1776.

In 1779 Wheatley issued a proposal for a second volume of poems, but was unable to publish it because she had lost her patrons after her emancipation; publication of books was often based on gaining subscriptions for guaranteed sales beforehand. The American Revolutionary War (1775–1783) was also a factor. However, some of her poems that were to be included in the second volume were later published in pamphlets and newspapers.

In 1768, Wheatley wrote "To the King's Most Excellent Majesty", in which she praised King George III for repealing the Stamp Act. As the American Revolution gained strength, Wheatley's writing turned to themes that expressed ideas of the rebellious colonists.

In 1770 Wheatley wrote a poetic tribute to the evangelist George Whitefield. Her poetry expressed Christian themes, and many poems were dedicated to famous figures. Over one-third consist of elegies, the remainder being on religious, classical, and abstract themes. She seldom referred to her own life in her poems. One example of a poem on slavery is "On being brought from Africa to America":

Twas mercy brought me from my Pagan land,
Taught my benighted soul to understand
That there's a God, that there's a Saviour too:
Once I redemption neither sought nor knew.
Some view our sable race with scornful eye,
"Their colour is a diabolic dye."
Remember, Christians, Negroes, black as Cain,
May be refin'd, and join th' angelic train. 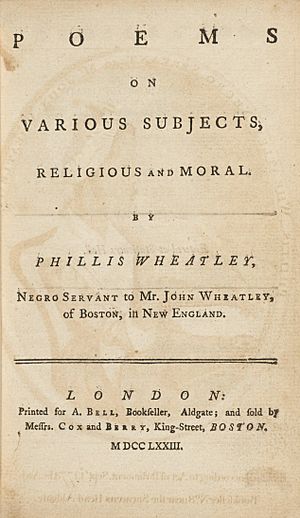 Many colonists found it difficult to believe that an African slave was writing "excellent" poetry. Wheatley had to defend her authorship of her poetry in court in 1772. She was examined by a group of Boston luminaries, including John Erving, Reverend Charles Chauncey, John Hancock, Thomas Hutchinson, the governor of Massachusetts, and his lieutenant governor Andrew Oliver. They concluded she had written the poems ascribed to her and signed an attestation, which was included in the preface of her book of collected works: Poems on Various Subjects, Religious and Moral, published in London in 1773. Publishers in Boston had declined to publish it, but her work was of great interest to influential people in London.

There, Selina, Countess of Huntingdon, and the Earl of Dartmouth acted as patrons to help Wheatley gain publication. Her poetry received comment in The London Magazine in 1773, which published as a "specimen" of her work her poem 'Hymn to the Morning', and said: "these poems display no astonishing works of genius, but when we consider them as the productions of a young, untutored African, who wrote them after six months careful study of the English language, we cannot but suppress our admiration for talents so vigorous and lively." Poems on Various Subjects, Religious and Moral was printed in 11 editions until 1816.

In 1778, the African-American poet Jupiter Hammon wrote an ode to Wheatley ("An Address to Miss Phillis Wheatley"). His master Lloyd had temporarily moved with his slaves to Hartford, Connecticut, during the Revolutionary War. Hammon thought that Wheatley had succumbed to what he believed were pagan influences in her writing, and so his "Address" consisted of 21 rhyming quatrains, each accompanied by a related Bible verse, that he thought would compel Wheatley to return to a Christian path in life.

In 1838 Boston-based publisher and abolitionist Isaac Knapp published a collection of Wheatley's poetry, along with that of enslaved North Carolina poet George Moses Horton, under the title Memoir and Poems of Phillis Wheatley, A Native African and a Slave. Also, Poems by a Slave. Wheatley's memoir was earlier published in 1834 by Geo W. Light, but did not include poems by Horton.

Thomas Jefferson, in his book Notes on the State of Virginia, was unwilling to acknowledge the value of her work or the work of any black poet. He wrote:

Misery is often the parent of the most affecting touches in poetry. Among the blacks is misery enough, God knows, but no poetry. Love is the peculiar oestrum of the poet. Their love is ardent, but it kindles the senses only, not the imagination. Religion indeed has produced a Phyllis Whately but it could not produce a poet. The compositions published under her name are below the dignity of criticism.

With the 1773 publication of Wheatley's book Poems on Various Subjects, she "became the most famous African on the face of the earth." Voltaire stated in a letter to a friend that Wheatley had proved that black people could write poetry. John Paul Jones asked a fellow officer to deliver some of his personal writings to "Phillis the African favorite of the Nine (muses) and Apollo." She was honored by many of America's founding fathers, including George Washington, who wrote to her (after she wrote a poem in his honor) that "the style and manner [of your poetry] exhibit a striking proof of your great poetical Talents."

She is commemorated on the Boston Women's Heritage Trail. The Phyllis Wheatley YWCA in Washington, D.C. and the Phillis Wheatley High School in Houston, Texas, are named for her, as was the historic Phillis Wheatley School in Jensen Beach, Florida, now the oldest building on the campus of American Legion Post 126 (Jensen Beach, Florida). A branch of the Richland County Library in Columbia, South Carolina, which offered the first library services to black citizens, is named for her. Phillis Wheatley Elementary School, New Orleans, opened in 1954 in Tremé, one of the oldest African-American neighborhoods in the US. The Phillis Wheatley Community Center opened in 1920 in Greenville, South Carolina, and in 1924 (spelled "Phyllis") in Minneapolis, Minnesota.

On July 16, 2019, at the London site where A. Bell Booksellers published Wheatley's first book in September 1773 (8 Aldgate, now the location of the Dorsett City Hotel), the unveiling took place of a commemorative blue plaque honoring her, organized by the Nubian Jak Community Trust and Black History Walks.

Wheatley is the subject of a project and play by British-Nigerian writer Ade Solanke entitled Phillis in London, which was showcased at the Greenwich Book Festival in June 2018.

All content from Kiddle encyclopedia articles (including the article images and facts) can be freely used under Attribution-ShareAlike license, unless stated otherwise. Cite this article:
Phillis Wheatley Facts for Kids. Kiddle Encyclopedia.