Jensen Beach is a census-designated place (CDP) in Martin County, Florida, United States. The population was 11,707 at the 2010 census. It is part of the Port St. Lucie, Florida Metropolitan Statistical Area.

Waveland was the original name for the area from Crossroads Hill (south of N.E. Center Street) south to the tip of Sewall's Point and west to Warner Creek.

Jensen Beach was rated the "Top Spot for Beach Volleyball" in 2008 by the "Prime Time Magazine", and is a part of the Treasure Coast which derives its name from the ships that wrecked during the 17th century because of coral reefs in the shallow waters. Artifacts and treasures from these ships of Spanish origin can still be discovered today.

The Skyline Drive area is among the highest points in south Florida. 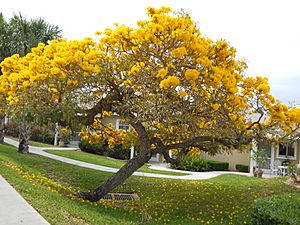 Tabebuia off Savanna Road in Jensen Beach, April 2010, typical of such trees blooming throughout Martin County in the spring 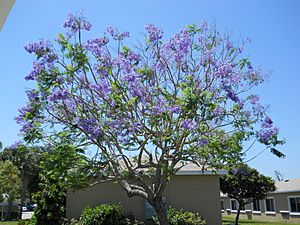 Jacaranda off Savanna Road in Jensen Beach, May 2010. 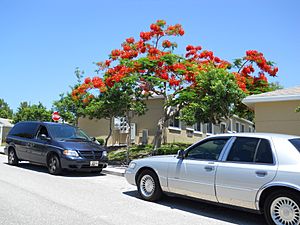 Royal Poinciana off Savanna Road in Jensen Beach, May 2010.

The main public beach in Jensen Beach is on Hutchinson Island and is called Jensen Sea Turtle Beach. It is a wide sandy beach on the Atlantic Ocean. Martin County life guards are in attendance. The beach is used for sun bathing, surfing, and swimming.

Jensen Beach is known in the marine biology community for being a location for sea turtles to nest.

Designated sections of the Jensen Sea Turtle Beach are barricaded off in order to protect the nests of the sea turtles. The three species found on this beach are the loggerhead, leatherback turtle and green sea turtle. Loggerhead nests are the most common type found on this and adjacent beaches. Locations of the sea turtles' nests are marked with the approximate date in which the eggs were laid and the expected date in which the eggs will hatch. These notifications are meant to discourage tourists and residents from visiting the beach in the evening hours during these time periods. Efforts are made to protect both species of sea turtles since nests have been declining in recent years due to the severe erosion of the beach.

The history of Jensen Beach in the 19th century revolved around pineapple farming. John Laurence Jensen, an immigrant from Denmark, arrived in 1881, and set up his pineapple plantation, which became the town of Jensen.

By 1894, the Florida East Coast Railway reached Jensen Beach, and freight shipments were loaded directly onto the freight cars.

By 1895, Jensen was called the “Pineapple Capital of the World,” shipping over one million boxes of pineapples each year during the June and July season To help handle the increased pineapple production, a pineapple factory was built.

A hard freeze in 1895 devastated most of the small pineapple plantations. Two fires, in 1908 and 1910, destroyed most of Jensen Beach and its remaining pineapple farms. The industry finally collapsed in 1920 due to a wide variety of financial and agriculture problems. Growers decided to turn their efforts in another direction: raising citrus. The pineapple has become a symbol of Jensen Beach. The fruit legacy is celebrated annually during the Jensen Beach Pineapple Festival.

The Saint Joseph College of Florida was in Jensen.

Historic landmarks in Jensen Beach include:

Jensen Beach has been the sister city of Gregory Town in the Bahamas since July 1989.

The climate in this area is characterized by hot, humid summers and generally mild to cool winters. According to the Köppen Climate Classification system, Jensen Beach has a humid subtropical climate, abbreviated "Cfa" on climate maps. 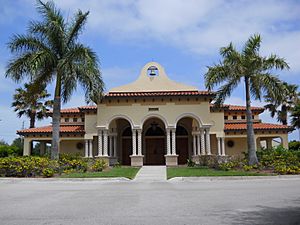 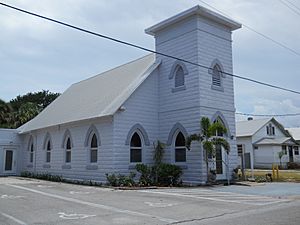 Downtown Jensen Beach is the site of the annual Pineapple Festival.

All content from Kiddle encyclopedia articles (including the article images and facts) can be freely used under Attribution-ShareAlike license, unless stated otherwise. Cite this article:
Jensen Beach, Florida Facts for Kids. Kiddle Encyclopedia.