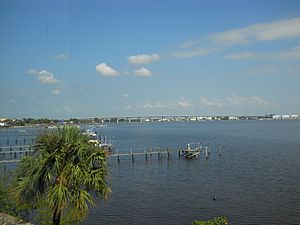 Martin County is a county located in the Treasure Coast region of the state of Florida, in the United States. As of the 2020 census, the population was 158,431. Its county seat is Stuart. Martin County is in the Port St. Lucie, FL Metropolitan Statistical Area.

When the county was created, the western contour followed the shore of Lake Okeechobee, as did the borders of Glades, Okeechobee, and Hendry counties. Palm Beach County had historically claimed all of the surface of the lake as part of its area, to its benefit for the distribution of state and federal highway funds. The state representative of Martin County, William Ralph Scott of Stuart, initiated a bill to divide the lake among its adjacent counties, creating a more equitable distribution of state funds for road creation and maintenance. All bordering counties confirmed the justice of this change and supported its ratification, with the exception of Palm Beach County. Representatives from Palm Beach County later presented Representative William Scott with a jug of water, signifying "all the water Bill Scott left Palm Beach County." The jug is in the possession of Stuart Heritage.

On the National Register of Historic Places:

Other historic areas listed in 1989 by the Florida Chapter of the American Institute of Architects:

Other places listed in 2012 by the Florida Chapter of the American Institute of Architects in its Florida Architecture: 100 Years. 100 Places.

Downtown Stuart, in the heart of the county seat 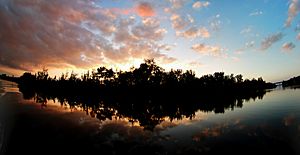 Sunset from the Intracoastal Waterway at Hobe Sound

All content from Kiddle encyclopedia articles (including the article images and facts) can be freely used under Attribution-ShareAlike license, unless stated otherwise. Cite this article:
Martin County, Florida Facts for Kids. Kiddle Encyclopedia.