Ocean Breeze, formerly Ocean Breeze Park, is a town on the Indian River in Martin County, Florida, United States. Ocean Breeze and Briny Breezes in Palm Beach County are the only two towns in Florida in which all residents live in a mobile home park bearing the name of the town. The population was 463 at the 2000 census. As of 2004, the population recorded by the U.S. Census Bureau is 459.[1] The population figures do not include the many part-time winter residents from other places. The town is an enclave within the census-designated place of Jensen Beach

The Town of Ocean Breeze is part of the Port St. Lucie Metropolitan Statistical Area, which includes all of Martin and St. Lucie counties. 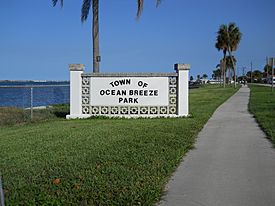 Ocean Breeze Trailer Park was established in 1938 in Stuart, Florida by Harry Hoke.

The Ocean Breeze Park town government was formed in 1960 when 142 property owners in Ocean Breeze Trailer Park voted to incorporate. Harry Hoke was elected as the town's first mayor. Gene Hoke, Jeri Hoke, Jack McNab, Leo Williams, John Corliss, and Luther Weeks were elected to the Board of Aldermen. Alice Hoke was named town clerk, Dick Hoke was named first Marshall, and Evans Crary, Sr., who guided the town through the legal procedure of incorporation, was appointed town attorney. At the time of its incorporation, the 65-acre park was said to be the largest privately owned trailer park in the United States. As of 2013, the town has dropped the 'Park' and is known simply as Ocean Breeze. 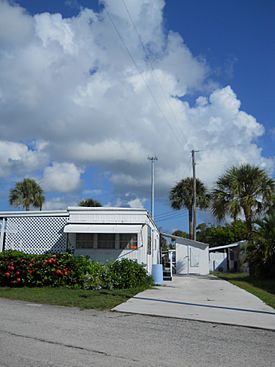 The town consists of three sections:

All roads within the town are private except for Ocean Breeze Drive which runs east-west and Indian River Drive, CR 707, which runs north-south. The residents of the town are among the few in the area who still receive mail delivered to their front doors instead of curbside. The town is served by the Jensen Beach post office (ZIP 34957). 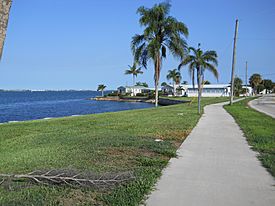 The riverside portion of the town from the north

There were 335 households out of which 0.3% had children under the age of 18 living with them, 26.9% were married couples living together, 4.8% had a female householder with no husband present, and 67.8% were non-families. 63.6% of all households were made up of individuals and 43.9% had someone living alone who was 65 years of age or older. The average household size was 1.38 and the average family size was 2.05.

All content from Kiddle encyclopedia articles (including the article images and facts) can be freely used under Attribution-ShareAlike license, unless stated otherwise. Cite this article:
Ocean Breeze, Florida Facts for Kids. Kiddle Encyclopedia.