Fort Pierce is a city in and the county seat of St. Lucie County, Florida, United States. It is also known as the Sunrise City, sister to San Francisco, California, the Sunset City. The population was 41,590 at the 2010 census. As of 2012, the population recorded by the U.S. Census Bureau was 42,645. It is named after the army installation of Fort Pierce built in the area in 1838 during the Second Seminole War.

Fort Pierce was awarded the 2005 City of Excellence Award by the Florida League of Cities for overall excellence in city government and in 2011, Main Street Fort Pierce, Inc. received the Great American Main Street Award from the National Trust for Historic Preservation in downtown.

The climate of Ft. Pierce is generally a humid subtropical climate, although it closely borders a tropical savanna climate. Summertime temperatures range between 80 and 100 degrees F. Temperatures in the winter range between 55 and 80 degrees F, although some winter days can drop down below 40 degrees, but rarely fall below freezing.

Fort Pierce is located on U.S. Route 1, near its intersection with Florida Route 70. Interstate Route 95 and Florida's Turnpike are nearby, at the west edge of town. The Intracoastal Waterway passes through the city. The nearest airport with scheduled passenger service is in Melbourne; the closest major airport is in West Palm Beach.

Fort Pierce is served by the St. Lucie Transportation Planning Organization (TPO). The TPO is a Metropolitan Planning Organization (MPO), a federally mandated and federally funded transportation policy-making organization responsible for transportation planning, programming, and financing of State and Federal transportation funds for the City of Fort Pierce. The TPO is governed by a TPO Board, which is composed of elected officials, representatives from the St. Lucie County School Board, and representatives from Community Transit, a division of The Council on Aging of St. Lucie, Inc. The original bus system started as a demand response service bus in the 1990s; it only served St. Lucie County. Soon it expanded to a fixed route system, going to predetermined locations along a route. On June 3, 2002, the Florida Department of Transportation (FDOT) approved funding, expanding the bus service to Martin County, and it became the Treasure Coast Connector.

According to the U.S. Army Corps of Engineers, an average of 350,000 tons of waterborne commerce moves through Fort Pierce Harbor annually. Major commodities which are dependent on the port include citrus exports, cement and aragonite imports. The last navigation improvements at Fort Pierce were authorized by the U.S. Congress in the Water Resources Development Act of 1988 dated November 17, 1988 and construction was completed in August 1996. The existing entrance channel is 400 feet wide and 30 feet deep, the interior channel is 250 feet wide and 28 feet deep, the existing turning basin is 1,100 feet square and 28 feet deep, and the north access channel is located immediately north of the main turning basin is 1,250 feet long, 250 feet wide and 28 feet deep. 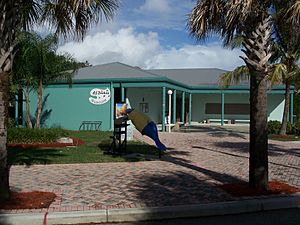 All content from Kiddle encyclopedia articles (including the article images and facts) can be freely used under Attribution-ShareAlike license, unless stated otherwise. Cite this article:
Fort Pierce, Florida Facts for Kids. Kiddle Encyclopedia.