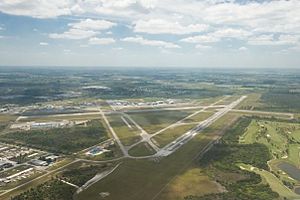 The airport sees frequent use by various aviation flight schools in south Florida, including three based at the airport, for general aviation flight training traffic. The airport also hosts a Federal Inspection Station (FIS) administered by United States Customs & Border Protection, which makes it a frequent stop for private aircraft coming in and out of the Bahama Islands.

DayJet provided an on-demand jet air taxi service from this airport before they suspended operation in September 2008.

The history of the airport dates back to 1921 when The Commercial Club of Fort Pierce built an airport where the local American Legion building now stands on U.S. Route 1 for an airline that never got off the ground. Nine years later, the county purchased 1,600 acres (6.5 km2) of land that eventually became the current airport; however the first commercial airport was dedicated in 1935 in an area in the vicinity of U.S. Route 1 and Edwards Road.

The current airport, originally named Fort Pierce Airport, was leased during World War II by the U.S. Navy as an auxiliary field for pilots and flight crews from Naval Air Station Vero Beach, Naval Air Station Melbourne and Naval Air Station Fort Lauderdale for conducting daytime and nighttime field carrier landing practice (FCLP) prior to landing on actual aircraft carriers. Scout aircraft, dive bombers and torpedo attack bombers utilized the runways, which were redesigned by the military to better accommodate naval aviation training requirements. In 1947, the Navy disestablished operations and the U.S. Government conveyed the airport back to the county, to include two newly constructed runways, without charging for the improvements made.

With little financial capital in county government to operate and maintain a modern airport, the facility languished for the next ten years, becoming overgrown with vegetation and subject to frequent grazing by cattle from nearby farms and ranches. During the 1960s and 1970s, major improvements took off with the construction of an airport terminal, modern hangars, airfield lighting, navigational aids and fuel facilities. Curtis King, who became the first full-time director in 1967, played an instrumental role in the development of the county's airport for 31 years.

The airport continued to evolve as a general aviation facility, and even though two of four runways were decommissioned, one such former runway became the site of the Airport West Commerce Park, while Runway 9R/27L (later renamed 10R/28L) was lengthened and improved.

Runway 10L/28R was completed early 2010 costing $15.3 million. The recent completion of a north-south connector taxiway between training runway 10L/28R and runway 10R/28L reduces the need for training aircraft to use one of the primary runways for takeoffs and landings at the beginning and/or end of training flights, respectively.

All content from Kiddle encyclopedia articles (including the article images and facts) can be freely used under Attribution-ShareAlike license, unless stated otherwise. Cite this article:
Treasure Coast International Airport Facts for Kids. Kiddle Encyclopedia.