Indiantown is a village in Martin County, Florida, United States. The population was 6,083 at the 2010 census. It is part of the Port St. Lucie Metropolitan Statistical Area. Indiantown is a rural community in Florida's Treasure Coast first established in the early 1900s, then incorporated on December 31, 2017, as the newest local government in Florida. The Village is governed by a mayor and council elected at-large, while day-to-day operations are directed by the village manager. 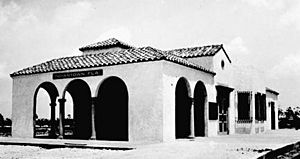 Indiantown was originally established by the Seminole people as a trading post. It was then settled by white American migrants in the 1890s.

Old Indiantown Road - Within Timer Powers Park, you will find a historical marker sign that details Jupiter Indiantown Road as it existed from the 1900s until the late 1950s. Inscription from the sign: From 1900 until the late 1950s, the Jupiter Indiantown Road connected the communities of Jupiter and Indiantown, giving residents access to resources. Dade County governed the area in 1899, when the new road was cut. In Indiantown about that time, brothers Joe and Dessie Bowers developed citrus groves and ran a trading post exchanging goods for hides with the Seminoles. Transportation of goods on the 16-mile road took two days by oxcart. The road was improved in 1912 using mules to haul shell rock from Jupiter. Around 1916 the St. Lucie Canal intersected the road near Indiantown. A hand winched ferry provided cross passage until a one-lane turning bridge was built in 1927. Homesteads, cattle ranches, and later the Davis and Jenkins sawmill were established along the road. Also known as the Jupiter Grade Road, the Jupiter Okeechobee Road and the Central Dixie Highway, in 1936 it became State Road 29. By the late 1950s nearby paved highways replaced the historic dirt road. In 1993 the road was declared a Scenic By-Way by Martin and Palm Beach Counties. (Erected: F-581 "A Florida Heritage Site Sponsored by the Martin County Board of County Commissioners and the Florida Department of State" 2006)

Warfield planned to make Indiantown the southern hub of the Seaboard rail line. Toward that end, he planned a model city, laying out streets and building a school, housing, and a railroad station. Warfield also built the Seminole Inn, which is now on the National Register of Historic Places. 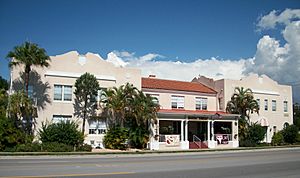 However, the Florida land boom of the 1920s fizzled out after 1926. Warfield died a year later, putting an end to plans to make Indiantown the Seaboard's southern headquarters. The 1928 Okeechobee hurricane wreaked significant destruction and halted further development.

Seaboard trains continued to stop at the Indiantown depot through the 1960s but passenger service to the station was eliminated when Amtrak took over in 1971. The depot was demolished several years later. The Seminole Inn is virtually all that remains of the 1920s boom.

Warfield's contributions to Indiantown are memorialized in, among others, Warfield Boulevard (the main route through Indiantown) and Warfield Elementary School.

According to the United States Census Bureau, the CDP has a total area of 6.0 square miles (16 km2), all land.

Indiantown is served by a shuttle around Indiantown, operated by Martin County.

Indiantown is the home of Payson Park, one of the top thoroughbred horse racing facilities in the United States. Among the trainers with their champion horses who have participated in this event are William Mott, Christophe Clement, Roger Attfield, Shug McGaughey, John Kimmel, and Tom Albertrani. Monkees frontman Davy Jones also kept a stable of Thoroughbred horses in Indiantown, and it was here that he died in 2012. 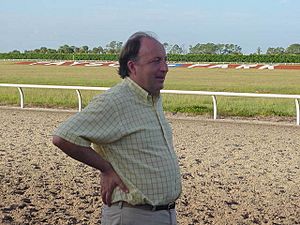 All content from Kiddle encyclopedia articles (including the article images and facts) can be freely used under Attribution-ShareAlike license, unless stated otherwise. Cite this article:
Indiantown, Florida Facts for Kids. Kiddle Encyclopedia.