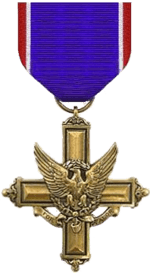 The Distinguished Service Cross was first awarded during World War I. In addition, a number of awards were made for actions before World War I. These were to soldiers who had received a 'Certificate of Merit' for gallantry. At the time the certificate was given it was the only other honor for gallantry the Army could award other than a Medal of Honor. Others were awarded for earlier actions in the Philippines, on the Mexican Border and during the Boxer Rebellion.

The Distinguished Service Cross may be awarded to any person serving in any capacity with the United States Army. The person must distinguish himself or herself by extraordinary heroism while engaged in an action against an enemy. Or, while engaged in military operations involving conflict with an opposing/foreign force or while serving with friendly forces. The act or acts of heroism must have been so notable and have involved risk of life so extraordinary as to set the individual apart from his or her comrades. But it is not sufficient to merit the Medal of Honor.

All content from Kiddle encyclopedia articles (including the article images and facts) can be freely used under Attribution-ShareAlike license, unless stated otherwise. Cite this article:
Distinguished Service Cross (United States) Facts for Kids. Kiddle Encyclopedia.