Richard Winters (21 January 1918 — 2 January 2011) was a US soldier who fought in World War II. His experience was made famous by a book and television series, Band of Brothers. Winters was a member of Company E, 506th Parachute Infantry Regiment, 101st Airborne Division. He led the company after the commanding officer was killed on D-Day in Normandy. Near the end of the war he led his company to capture Adolf Hitler's mountain retreat in Bavaria, Berchtesgaden. he was awarded the Distinguished Service Cross, Bronze Star and a Purple Heart.

After the war he worked in a plaster mill in New Jersey. In 1951 he bought a farm in Pennsylvania and established an animal feed business.

In 1990 Winters was interviewed by author Stephen Ambrose who was able to use the records that Winters and others in E Company had written for his book. The title Band of Brothers, comes from a line in William Shakespeare's play, Henry V. 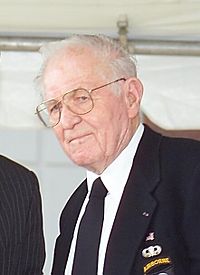 All content from Kiddle encyclopedia articles (including the article images and facts) can be freely used under Attribution-ShareAlike license, unless stated otherwise. Cite this article:
Richard Winters Facts for Kids. Kiddle Encyclopedia.