Kids Encyclopedia Facts
This page is about the Pennsylvania city. For other uses, see Lancaster, Pennsylvania (disambiguation).

Lancaster; is a city located in South Central Pennsylvania which serves as the seat of Pennsylvania's Lancaster County and one of the oldest inland towns in the United States (along with Hartford, Connecticut; Springfield, Massachusetts; Petersburg, Virginia; Albany, New York; Schenectady, New York, and several other early settlements). With a population of 59,322, it ranks eighth in population among Pennsylvania's cities. The Lancaster metropolitan area population is 507,766, making it the 101st largest metropolitan area in the US and 2nd largest in the South Central Pennsylvania area.

The city's primary industries include healthcare, tourism, public administration, manufacturing, both professional and semi-professional services, and home of the Park City Center shopping mall, the largest indoor retail facility in the region. Lancaster hosts more electronic public CCTV outdoor cameras per capita than cities such as Boston or San Francisco, despite controversy among residents. Lancaster was home to James Buchanan, the nation's 15th president, and to congressman and abolitionist Thaddeus Stevens.

Originally called Hickory Town, the city was renamed after the English city of Lancaster by native John Wright. Its symbol, the red rose, is from the House of Lancaster. Lancaster was part of the 1681 Penn's Woods Charter of William Penn, and was laid out by James Hamilton in 1734. It was incorporated as a borough in 1742 and incorporated as a city in 1818.

During the American Revolution, Lancaster was the capital of the United States for one day, on September 27, 1777, after the Continental Congress fled Philadelphia, which had been captured by the British. The revolutionary government then moved still farther away to York, Pennsylvania.

Lancaster was capital of Pennsylvania from 1799 to 1812, after which the capital was moved to Harrisburg.

In 1851, the current Lancaster County Prison was built in the city, styled after Lancaster Castle in England. The prison remains in use, and was used for public hangings until 1912. It replaced a 1737 structure on a different site.

The first paved road in the United States was the former Philadelphia and Lancaster Turnpike, which makes up part of the present-day U.S. Route 30. Opened in 1795, the Turnpike connected the cities of Lancaster and Philadelphia, and was designed by a Scottish engineer named John Loudon McAdam. Lancaster residents are known to use the word "macadam" in lieu of pavement or asphalt. This name is a reference to the paving process named for McAdam.

The city of Lancaster was home to several important figures in American history. Wheatland, the estate of James Buchanan, the fifteenth President of the United States, is one of Lancaster's most popular attractions. Thaddeus Stevens, considered among the most powerful members of the United States House of Representatives, lived in Lancaster as an attorney. Stevens gained notoriety as a Radical Republican and for his abolitionism. The Fulton Opera House in the city was named for Lancaster native Robert Fulton, a renaissance man who created the first fully functional steamboat. All of these individuals have had local schools named after them.

After the American Revolution, the city of Lancaster became an iron-foundry center. Two of the most common products needed by pioneers to settle the Frontier were manufactured in Lancaster: the Conestoga wagon and the Pennsylvania long rifle. The Conestoga wagon was named after the Conestoga River, which runs through the city. The innovative gunsmith William Henry lived in Lancaster and was a U.S. congressman and leader during and after the American Revolution.

In 1803, Meriwether Lewis visited Lancaster to be educated in survey methods by the well-known surveyor Andrew Ellicott. During his visit, Lewis learned to plot latitude and longitude as part of his overall training needed to lead the Lewis and Clark Expedition.

In 1879, Franklin Winfield Woolworth opened his first successful "five and dime" store in the city of Lancaster, the F. W. Woolworth Company.

Lancaster was one of the winning communities for the All-America City award in 2000.

On October 13, 2011, Lancaster's City Council officially recognized September 27 as Capital Day, a holiday recognizing Lancaster's one day as capital of the United States in 1777.

The largest ethnic groups in Lancaster as of recent estimates are :

In 2010, 29.2% of Lancaster residents were of Puerto Rican ancestry. The city has the second highest concentration of Puerto Ricans in Pennsylvania after Reading. For this reason, it is sometimes referred to as the "Spanish Rose." Lancaster celebrates its Puerto Rican heritage once every year with the Puerto Rican Festival. 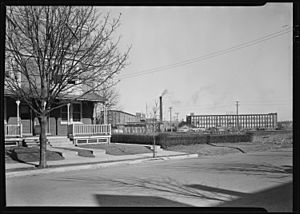 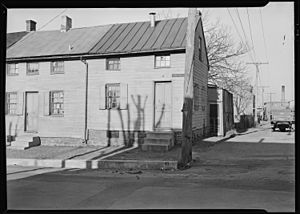 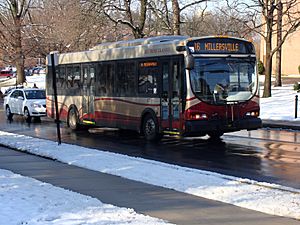 The Red Rose Transit Authority (RRTA) provides local bus transit to Lancaster City as well as surrounding areas in Lancaster County. RRTA is headquartered outside the City of Lancaster.

Bieber Tourways (formerly Capitol Trailways) provides intercity bus transit from the Lancaster Train and Bus Station to King of Prussia, Philadelphia, and New York City to the east, and York and Harrisburg to the west.

Amtrak also serves the Lancaster Train and Bus Station, located on the northernmost edge of the city at 53 East McGovern Avenue. The Pennsylvanian, with service between Pittsburgh and Philadelphia, as well as the Keystone Service, which runs from Harrisburg to New York via Philadelphia, both serve Lancaster. The city is served by the Lancaster Airport, located six miles (10 km) north of downtown and just south of Lititz. 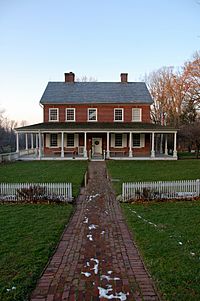 Many of Lancaster's landmarks are significant in local, state, and national history.

The city of Lancaster has art, craft and historical museums. The Demuth Museum is located in the former home of the well-known painter Charles Demuth, who had a national reputation in the 20th century. Additional art museums include the Lancaster Museum of Art and the Philips Museum of Art on the campus of Franklin & Marshall College. Art students at the state-of-the-art Pennsylvania College of Art and Design present their works at the academy's gallery, which is open to the public. LancasterARTS, a non-profit organization founded in 2002, promotes contemporary arts and crafts.

Lancaster city has a thriving art community. Gallery Row on the 100 block of North Prince St. features a block of art galleries, and the city proper has over 40 galleries and artists studios. The Galleries host a "First Friday" each month, extending business hours to exhibit new artwork and new artists to the public.

The Lancaster County Quilts and Textile Museum, completed in 2007, celebrates the art of the hand-sewn quilts and other textile items produced by women of the region's Amish and Mennonite communities. The Lancaster Mennonite Historical Society Museum and the Heritage Center Museum display artifacts and interpret the region's unique history. Children can have a hands-on experience with educational learning at the Hands-on House, also known as Children's Museum of Lancaster. Nature and geology-minded visitors can view the more earthly exhibits of the Louise Arnold Tanger Arboretum and the North Museum of Natural History and Science.

Upon completion, the Lancaster County Convention Center will incorporate the Stevens and Smith Historic Site. This museum that will include the preserved home of US Senator Thaddeus Stevens and his companion Lydia Hamilton Smith. In addition to its exhibits, the underground portion of the site will feature a recently discovered Underground Railroad feature: a converted water cistern used in the antebellum years to hide fugitive slaves on their way to freedom.

In Lancaster County, the Landis Valley Museum in Manheim Township has exhibits that interpret the county's history and culture, especially as a center of ethnic German Amish and Mennonite culture.

All content from Kiddle encyclopedia articles (including the article images and facts) can be freely used under Attribution-ShareAlike license, unless stated otherwise. Cite this article:
Lancaster, Pennsylvania Facts for Kids. Kiddle Encyclopedia.