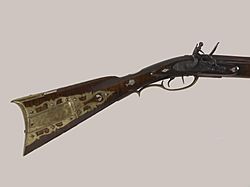 An example with a maple stock with brass and silver inlays

The Pennsylvania rifle, from about 1815 on, almost universally known as the Kentucky rifle, is a uniquely American firearm. For several decades in American History, it was the most accurate long-range rifle in America. The Pennsylvania rifle was the product of German gunsmiths who immigrated to Pennsylvania in the early 18th century. The rifle soon became the favorite of settlers and Frontiersmen. One of the early frontiers was Kentucky and men like Daniel Boone helped make the rifle known as the Kentucky rifle.

The Pennsylvania rifle developed from earlier and much heavier Jaeger rifle which were brought to the American colonies by German gunsmiths. The Jager rifle was a short, heavy rifle that fired a large caliber bullet. It was designed for hunting in Europe by the well to do. Like the longer and heavier smoothbore muskets of the time, both were not well suited for hunting in America.

These gunsmiths centered their activities around Lancaster County, Pennsylvania for a number of good reasons. It was an important crossroads for trade at the time. It lay between Philadelphia, Pennsylvania and the wilderness to the west. The area also had large iron ore deposits for gun barrels and hardwood forests for gun stocks. The product that evolved from the earlier gun designs could shoot up to five times farther. The Pennsylvania rifle could accurately hit targets at 300 yards (270 m). From about 1730 and through the War of 1812, the Pennsylvania rifle was the preferred long range rifle in America.

During the American Revolutionary War companies of Pennsylvania riflemen created disruption behind the British lines. Well out of range of the British Brown Bess smoothbore musket, militiamen and snipers could target individual soldiers and officers from a long distance. George Washington was delighted to have these men equipped with their Pennsylvania rifles. Most soldiers used the musket because it was much easier and quicker to load in battle. But an American sharpshooter with his long rifle could pick off a British general who thought he was far enough away from the battle to be safe. This could and did change the outcome of several battles. Ashley Halsey Jr. wrote:

[A British general was outraged] that certain uncouth American frontiersmen, who wore their shirttails hanging out down to their knees, picked off his sentries and officers at outlandishly long ranges. Forthwith, the general ordered the capture of one specimen, each of the marksmen, and his gun. A raiding party dragged back Cpl. Walter Crouse, of York County, Pennsylvania, with his long rifle. At that point, the British … made a psychological blunder. They shipped their specimen rifleman to London. … Crouse, commanded to demonstrate his remarkable gun in public, daily hit targets at 200 yards—four times the practical range of the smoothbore military flintlock of the day. Enlistments faded away, so the story goes, and King George III hurriedly hired Hessian rifle companies to fight marksmanship with marksmanship.

The sharpshooters who carried these weapons are part of American history and myth. But they most certainly did exist and played an important part in battles such as the Battle of Saratoga in 1777 and the Battle of New Orleans in 1815.

Two Pennsylvania/Kentucky rifles. The one on top is percussion while the one on the bottom is flintlock.

There have been a number of names applied to this rifle and the name depended on where it was used. Whether the design was called a Kentucky rifle, a Schimmel, southern poor boys or a Tennessee rifle, many have consistently been manufactured in Lancaster, Pennsylvania. A typical rifle of this design had a barrel from 42 inches (1,100 mm) to 46 inches (1,200 mm) in length. It was .50 caliber (13 mm) and had a stock made of curly maple. The stock fully supported the barrel. It had a crescent-shaped buttplate, a patch box and a cheekpiece were also common. Early models used a flintlock firing mechanism while later models used the percussion cap. The barrels were rifled.

Daniel Boone's rifle is a typical example of a Pennsylvania rifle. It was 5 feet, 3 inches long (160cm). It was .44 caliber and fired a ball that weighed about 130 grains (8.4 g). The gun weighed 11 pounds (5.0 kg). Using a bullet mold, Boone could get about 55 lead balls from a single pound (0.45 kg) of lead. To fire a ball this size would require only about a thimble-full of black powder.

In a situation where there might be Hand-to-hand fighting, the Pennsylvania rifle was too delicate to use as a club. Striking it against anything could cause the stock to break. The long thin wrought iron barrel was relatively soft could be easily bent. Frontiersmen knew this and were careful not to damage their main hunting weapon. In battle, it took twice as long to reload a Pennsylvania rifle as it did the Brown Bess musket. Worse, due to the barrel length, the shooter almost had to stand up to carefully measure the powder, load the ball and patch, and tamp it down with a ramrod. It is no wonder Pennsylvania riflemen hid behind trees so as not to expose themselves to enemy fire. The main weapon during the Revolutionary war was the musket on both sides. Fewer than 10% of the American soldiers carried a long rifle.

All content from Kiddle encyclopedia articles (including the article images and facts) can be freely used under Attribution-ShareAlike license, unless stated otherwise. Cite this article:
Pennsylvania rifle Facts for Kids. Kiddle Encyclopedia.