The Brown Bess is a nickname for the British Short Land Pattern Musket. It was produced from 1725–1838. The Land Pattern, or more popularly known as the "Brown Bess", and its versions were all .75 caliber smoothbore flintlock muskets. They were the standard guns for all land forces in the British Empire. It was one of the most important military firearms ever designed. It helped win the British Empire. The Brown Bess was replaced after 1838 by smoothbore percussion cap muskets. Its effective range was about 100 yards (91 m) but in most battle situations the distance between forces was only about 50 yards (46 m). Even at that range the gun was not particularly accurate. The British tactic was to fire in vollies followed by a bayonet attack. While the origins of the name Brown Bess are uncertain, a plausible explanation is the name was based on the German Braun buss, meaning strong gun. The gun was commissioned during the reign of King George I of Great Britain, who was from Germany. 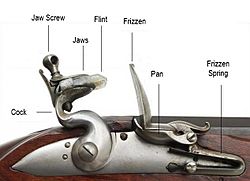 One of the earliest forms of flintlock musket used by the English Army was the "dog lock". Very similar to the snaphaunce it was the first to introduce the half-cocked position of the hammer. This made the gun much safer to handle and load. It was in use during the English Civil War and many found their way to the British North American colonies. Another name for the dog lock was the English lock, and the gun was a Swedish styled musket. Some of these have been found at Jamestown and Yorktown, Virginia by archaeologists.

Between 1710 and 1720 the first King's pattern musket called “Long Land Service” came into use. It had a 46 inches (1,200 mm) barrel, iron furniture and the French lock (or "true" flintlock) style of flintlock. Later the metal parts (furniture) were changed to brass and the wood ramrod which broke easily was replaced by an iron ramrod.

In about 1768, a new pattern Short Land Service Musket with a 42 inches (1,100 mm) barrel was produced. This was the result of the 1768 Clothing Warrant that was intended to lessen the weight of uniforms and equipment carried by British soldiers. In addition to shortening the musket, to reduce its weight, soldiers could no longer carry swords (except in the Highland and Grenadier units). Uniforms were trimmed to be less bulky. This is the gun most used by British forces during the American Revolutionary War. Among the variety of weapons used by the Continental Army, versions of the Brown Bess were also used. 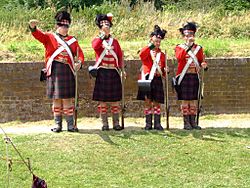 The British manual listed 11 drill maneuvers soldiers had to follow to load and fire their muskets. This was the same drill as the one in the drill manual by Friedrich Wilhelm von Steuben for the Continental Army. Unless otherwise mentioned steps are performed in one motion:

At this point, observing the troops are all ready to fire, the command is given to "fire". The drill is then repeated as necessary.

All content from Kiddle encyclopedia articles (including the article images and facts) can be freely used under Attribution-ShareAlike license, unless stated otherwise. Cite this article:
Brown Bess Facts for Kids. Kiddle Encyclopedia.