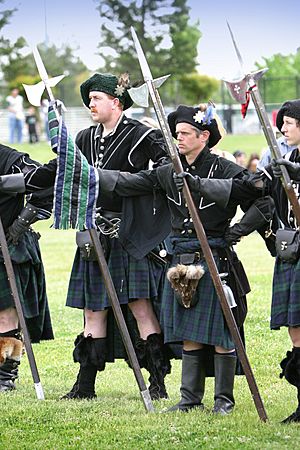 The halberd is a two handed pole weapon that has a axe blade topped with a spike mounted on a long shaft and a hook or thorn on the back side of the axe blade. The Halberd was popular during the 14th and 15th centuries. The Halberd is still the ceremonial weapon of the Swiss Guard in the Vatican.

All content from Kiddle encyclopedia articles (including the article images and facts) can be freely used under Attribution-ShareAlike license, unless stated otherwise. Cite this article:
Halberd Facts for Kids. Kiddle Encyclopedia.