The town is most famous as the site of the siege and subsequent surrender of General Charles Cornwallis to General George Washington and the French Fleet during the American Revolutionary War on October 19, 1781. Although the war would last for another year, this British defeat at Yorktown effectively ended the war. Yorktown also figured prominently in the American Civil War (1861–1865), serving as a major port to supply both northern and southern towns, depending upon who held Yorktown at the time.

One of Yorktown's historic sister cities is Zweibrücken in Germany, based on participation of a unit from there during the American Revolutionary War.

Surrender of Lord Cornwallis at Yorktown in 1781. (Painting by John Trumbull)

Yorktown, named for the ancient city of York in Yorkshire, Northern England, was founded in 1691 as a port on the York River for English colonists to export tobacco to Europe. The lawyer Thomas Ballard was the principal founder of the city along with Joseph Ring. It was called "York" until after the American Revolutionary War, when the name "Yorktown" came into common use.

The town reached the height of its development around 1750, when it had 250 to 300 buildings and a population of almost 2,000 people. It was the base of British General Charles Cornwallis during the 1781 siege, which was the last major battle of the American Revolutionary War.

When waterways were critical to transportation, Yorktown was thought to occupy a strategic location controlling upstream portions of the York River and its tributaries and their access to the Chesapeake Bay. In his Notes on the State of Virginia published in 1781–82, Thomas Jefferson noted that the York River at Yorktown "affords the best harbour in the state for vessels of the largest size. The river there narrows to the width of a mile, and is contained within very high banks, close under which the vessels may ride."

The population dropped in Yorktown and other areas of the mostly rural peninsula after the state's capital was relocated from Williamsburg to Richmond on the James River, attracting more development there. In addition, tobacco exhausted the soil, and planters shifted to mixed crops, which required less slave labor. Many generations of younger sons migrated out of the Tidewater area to new lands further west, into the Piedmont and beyond to Kentucky, Tennessee and what became the Northwest Territory.

During the 1862 Peninsula Campaign of the American Civil War (1861–1865), the town was captured by the Union following the Siege and Battle of Yorktown. It was used as a base by the Union Army of the Potomac under General George B. McClellan to launch an attack on Richmond.

One of Yorktown's sister cities is Zweibrücken, Germany. During the American Revolutionary War, the Royal Deux-Ponts Regiment was commanded by Comte Christian de Forbach (son of Christian IV, Count Palatine of Zweibrücken, and the deputy commander was his brother Philippe Guillaume (later renamed to Wilhelm). This was one of the four regiments that arrived at Newport, Rhode Island with Rochambeau in 1780. It participated on the side of Americans in the Battle of Yorktown in 1781.

During World War I, to support Atlantic defenses, the federal government in 1918 acquired about 13,000 acres (53 km2) for development by the US Navy as Mine Depot, Yorktown. This large installation straddled York, Warwick and James City counties. It has since expanded and been developed as Naval Weapons Station Yorktown. Cheatham Annex, a facility which was developed over the former town of Penniman, is also included as part of the base.

United States Coast Guard Training Center Yorktown serves as a training school for the United States Coast Guard. Also relatively close to Yorktown are Camp Peary (in York County), the Northrop Grumman Newport News Shipbuilding yards and facilities, and Fort Eustis Army base (both in Newport News). Other major installations in the area are Naval Station Norfolk, located at Norfolk, and Langley Air Force Base in Hampton. 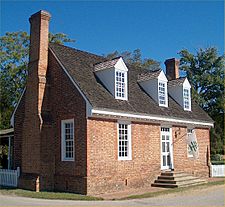 In the early 21st century, Yorktown is popular as a destination in heritage tourism. Yorktown has distinct areas. Yorktown Village or Historic Yorktown is located close to the York River, near the George P. Coleman Memorial Bridge that spans the river to Gloucester Point. Historic Yorktown is comprised first of Water Street, a small strip along the beach of the river; it contains several small restaurants, a park, a hotel, a pier, an antique shop. In May 2005 a building was constructed with more shops and restaurants, enhancing what is known as the "Riverwalk" section on the waterfront.

Next, Main Street is located on a bluff above the floodplain. Architecture in this area is almost exclusively original to the colonial era. Nine buildings, including the circa-1730 Nelson House and Somerwell House (see photo), survive from the pre-Revolutionary period. The old court house, several small shops, the Nelson House, and the Yorktown Monument are located along this road. Around the center of the town are residential streets. Grace Episcopal Church, situated on Church Street near the old courthouse, is noted for its architecture. 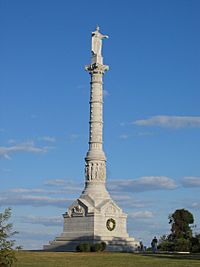 Yorktown and the nearby area are significant to the early history of the United States. Colonial National Historical Park, which contains and preserves Yorktown National Battlefield and Yorktown National Cemetery, is located on the outskirts of town. The battlefield has many of the earthworks dug by the besieging American and French forces.

The Yorktown Victory Monument – commemorating the victory, the alliance with France that brought it about, and the resulting peace with Great Britain after the war - is located just outside the current town. Designed by New York architect Richard Morris Hunt, the monument was installed in 1884 and topped by a figure of Liberty sculpted by John Quincy Adams Ward. That element was destroyed by lightning in 1942. It was replaced in 1957 by a figure of Victory by Oskar J. W. Hansen. A memorial to the French war dead of the Yorktown campaign is being planned for construction at the French cemetery on the site of the battle.

Williamsburg Area Transit Authority (WATA) operates a sightseeing trolley route around Yorktown on a daily basis. The loop service has been in place since 1999. However, WATA does not provide bus service between Yorktown and any other place in Hampton Roads. 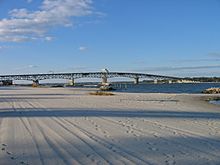 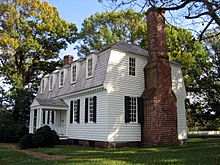 All content from Kiddle encyclopedia articles (including the article images and facts) can be freely used under Attribution-ShareAlike license, unless stated otherwise. Cite this article:
Yorktown, Virginia Facts for Kids. Kiddle Encyclopedia.