Camp Peary is an approximately 9,000 acre military reservation in York County near Williamsburg, Virginia. Officially referred to as an Armed Forces Experimental Training Activity (AFETA) under the authority of the Department of Defense, Camp Peary hosts a covert CIA training facility known as "The Farm", which is used to train officers of the CIA's Directorate of Operations, as well as those of the DIA's Defense Clandestine Service, among other intelligence entities. Camp Peary has a sister facility, "The Point", located in Hertford, North Carolina.

Porto Bello, the historic hunting lodge of Lord Dunmore, last royal governor of Virginia, is listed on the National Register of Historic Places and is located on the grounds of Camp Peary.

The majority of Camp Peary falls within York County, though a small portion of the reservation near Skimino Creek at the western edge is located in James City County. 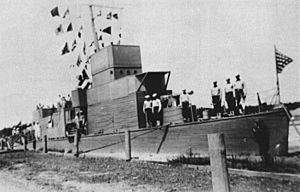 "Miss Never Sail": a wooden mock-up of a destroyer escort at Camp Peary used for training in 1945.

During World War II, beginning in 1942, the United States Navy took over a large area on the north side of the Virginia Peninsula in York County, Virginia which became known as Camp Peary, initially for use as a Seabee training base. The Chesapeake and Ohio Railway (C&O) extended a spur track from its Richmond-Newport News main line tracks to the site from nearby Williamsburg, and established Magruder Station near the former unincorporated town of Magruder.

As part of the process of converting the property to a military reservation, all residents of the entire towns of Magruder and Bigler's Mill had to vacate. The town of Magruder was a traditionally African-American community, established for freedmen after the American Civil War. It had been named for Confederate General John B. Magruder. A Civil War field hospital had occupied the site of Bigler's Mill near the York River.

Although the graves in the church cemetery were not moved, many of the residents and the local Mount Gilead Baptist Church were relocated to the Grove community, located on U.S. Route 60 in adjacent James City County a few miles away, where a number of displaced residents from an area near Lackey known simply as "the Reservation" had earlier relocated under similar circumstances during World War I when what is now the Naval Weapons Station Yorktown was created.

The first World War II Seabee recruits were the men who helped build Boulder Dam, America's highways and New York City skyscrapers. At Naval Construction Training Centers and Advanced Base Depots established on the Atlantic and Pacific coasts, Seabees were taught military discipline and the use of light arms.

During Seabee training, Capt. J.G. Ware was raising hogs on the property so the recruits called the place Capt. Wares hog farm. Originally the hog farm was in the center of things, but the enlisted men complained that the pigs were on high ground while they were in the mud. The hogs were moved to the edge of camp, but still within the limits of the government reservation. A bulldozer "B-16" was parked on the farm for clearing space for feed troughs, and carried 1,400 pounds of slop from the camp in one morning alone.

At the outset of the War, the preliminary training of the Seabees had been carried out at various Naval Training Stations throughout the country. In Virginia, after completing three weeks of boot training at Camp Allen, and later its successor, Camp Peary, the Seabees were formed into construction battalions or other types of construction units. Soon, however, another mission had been identified for Camp Peary. All preliminary and advanced specialized training for Seabees was changed to be conducted at Camp Allen and Camp Bradford at Norfolk, Virginia, where both were an integral part of the Naval Operating Base.

The mission of Camp Peary changed as the war progressed, and a new need presented itself to the U.S. Navy. It became a stockade for special German prisoners-of-war (POWs).

The POWs kept at Camp Peary were not just an ordinary sort, but rather, many were crewmen from captured German U-boats and ships that the Germans had thought lost at sea with crews presumed dead. It was important to keep the German authorities unaware of their capture, since knowledge that they had survived would mean that secret code books and Enigma machines thought lost at sea could also have been compromised. Learning that these men were being held as POWs, would almost certainly would have caused the Germans to change the secret codes that had been broken by Allied codebreakers, thus, extra secrecy was necessary. There is information about life at the Camp and the German PoWs in the Herman Recht papers held by the College of William and Mary, a set of letters written by a clerk at the Camp.

Many of the former POWs stayed in Virginia and the United States after the war, and became naturalized as U.S. citizens.

Turned loose by the Navy in 1946, Camp Peary became a Virginia state forestry and game reserve for five years. A reservoir that had been built on the upper reaches of Queen's Creek to supply the substantial fresh water needs of Camp Peary when it was a Seabee base was divested to the City of Williamsburg. The Waller Mill Reservoir formed the basis for the city's Waller Mill Park, although the park is located north of the city limits in York County. A portion of the abandoned Chesapeake and Ohio Railway spur from the Peninsula Extension main line just east of near Ewell Station to the base (also built during World War II) is now a recreational rail trail.

Then, in 1951, the U.S. Navy returned to the property, securing the portion north of the highway, which was State Route 168 at the time, and announced it closed to the public; it has been that way ever since. In June 1961, two months after the Bay of Pigs Invasion, the Navy announced it was officially opening a new facility at Harvey Point base, in Hertford, North Carolina. A spokesman said that all four branches of the military would conduct "testing and evaluation of various classified materials and equipment" at the new site. He added that some of the training "now being done at Camp Peary, Va., will be transferred to Harvey Point."

Camp Peary and areas near it were the primary setting for a 2007 novel by David Baldacci titled Simple Genius in which, as Baldacci admits, he took certain liberties with the details of place and specific activities of the area.

Camp Peary is known as "The Farm", a training facility run by the Central Intelligence Agency for the purpose of training CIA's clandestine officers, as well as officers of other organizations specializing in clandestine activities, such as the Defense Intelligence Agency. The existence of this facility is widely known, but has never been formally acknowledged by the U.S. government. Access to Camp Peary is strictly controlled, and all visitors to the installation on official business are escorted at all times. The portion of the original World War II Seabee base that is north of Interstate 64 has remained closed to the public since 1951. However, the roads and many structures of Magruder and Bigler's Mill are still there and many are occupied. An airport with a 5,000-foot (1,500 m) runway was added to the facility near the site of Bigler's Mill. Flight records show that at least 11 aircraft that appear to be owned by CIA front companies, and are believed to have been used as rendition aircraft by the CIA under the guise of charter flights have landed on this runway.

Former CIA officer Bill Wagner attended a three-week interrogation course at The Farm in 1970. He claims that it was the agency's "premier course", and that volunteers played the role of interrogation subjects in order to be guaranteed seats in future classes. Interrogators-in-training practiced techniques such as sleep deprivation, deliberately tainted food, and mock executions. According to Wagner, the course was dropped from the CIA training curriculum after the Watergate scandal, due to increased attention being paid to CIA practices.

All content from Kiddle encyclopedia articles (including the article images and facts) can be freely used under Attribution-ShareAlike license, unless stated otherwise. Cite this article:
Camp Peary Facts for Kids. Kiddle Encyclopedia.