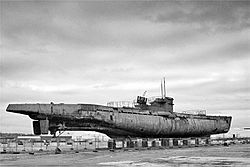 The name is an abbreviation of the German Unterseeboot ("undersea boat"). In English, U-boat refers exclusively to the German vessels used during the World Wars. In German, however, the term U-Boot refers to any submarine, including modern and foreign ones.

All content from Kiddle encyclopedia articles (including the article images and facts) can be freely used under Attribution-ShareAlike license, unless stated otherwise. Cite this article:
U-boat Facts for Kids. Kiddle Encyclopedia.