First Battle of the Atlantic facts for kids

The First Battle of the Atlantic (1914–1918) was a naval campaign of World War I, largely fought in the seas around the British Isles and in the Atlantic Ocean. Both the German Empire and United Kingdom relied heavily on imports to feed their population and supply their war industry; thus both aimed to blockade each other. The British had the Royal Navy which was superior in numbers and could operate within the British Empire. The German Navy could not destroy the British Navy, as seen at the Battle of Jutland.

The German fleet mainly used unrestricted submarine warfare. Neutral countries disliked the blockades and the sinking of RMS Lusitania especially angered the United States. The successful blockade of Germany contributed to its military defeat in 1918, and still in effect, enforced also the signing of the Treaty of Versailles in mid-1919. 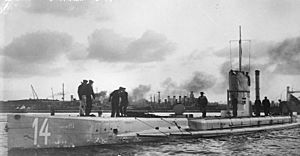 The Battle in Numbers

Allied and Neutral Tonnage sunk by submarines in World War I

Note that unrestricted submarine warfare was resumed in February 1917 and the British began full-scale convoying in September 1917. The heaviest losses were suffered in April 1917 when a record 881,027 tons were sunk by the U-boats.

All content from Kiddle encyclopedia articles (including the article images and facts) can be freely used under Attribution-ShareAlike license, unless stated otherwise. Cite this article:
First Battle of the Atlantic Facts for Kids. Kiddle Encyclopedia.