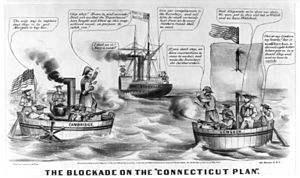 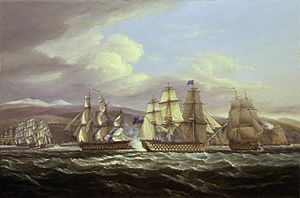 An action during the British fleet's blockade of the French port of Toulon between 1810 and 1814, depicted by Thomas Luny

A blockade is a physical blockage of a port or other place. Usually used of enemy ships surrounding a port.

By extension, a blockade is any effort to make sure that supplies, troops, information or aid do not reach an opposing force. Blockades are used in nearly all military campaigns and the tool of choice for economic warfare on an opposing nation. The International Criminal Court planned to include blockades against coasts and ports in its list of acts of war in 2009.

All content from Kiddle encyclopedia articles (including the article images and facts) can be freely used under Attribution-ShareAlike license, unless stated otherwise. Cite this article:
Blockade Facts for Kids. Kiddle Encyclopedia.