The Union Blockade was the closing of Confederate ports 1861-1865, during the American Civil War by the Union Navy, a form of economic warfare. The U.S. Navy maintained a massive effort on the Atlantic and Gulf coasts of the Confederate States of America designed to prevent the local and international movement of cotton, supplies, soldiers and arms into or out of the Confederacy. The vast majority of vessels from other nations obeyed the blockade. However, specialty ships were built to slip through, called blockade runners. They were mostly new high-speed ships with small cargo capacity. They were built and financed by British interests and operated by the British (using Royal Navy officers on leave) and ran between Confederate-controlled ports and the neutral ports of Havana, Cuba (Spanish); Nassau, Bahamas (British) and Bermuda (British), where British suppliers had set up supply bases. 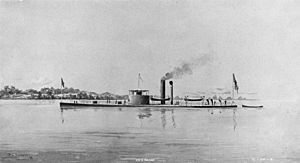 President Abraham Lincoln proclaimed the blockade on April 19, 1861. His strategy, part of the Anaconda Plan of General Winfield Scott, required the closure of 3,500 miles (5,600 km) of Confederate coastline and twelve major ports, including New Orleans, Louisiana, and Mobile, Alabama, the top two cotton-exporting ports, as well as the Atlantic ports of Charleston, South Carolina, Savannah, Georgia, and Wilmington, North Carolina. The Navy department built 500 ships, which destroyed or captured about 1,500 blockade runners over the course of the war. At first five out of six attempts to slip through the blockade were successful; by 1864 only half were successful (which mean the life expectancy of a blockade runner was one round trip). The blockade runners carried only a small fraction of the usual cargo. Thus, Confederate cotton exports were reduced 95% from 10 million bales in the three years prior to the war to just 500,000 bales during the blockade period.

All content from Kiddle encyclopedia articles (including the article images and facts) can be freely used under Attribution-ShareAlike license, unless stated otherwise. Cite this article:
Union Blockade Facts for Kids. Kiddle Encyclopedia.