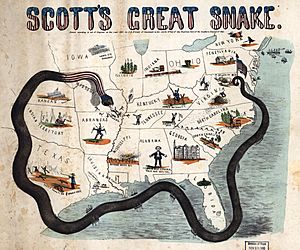 The Anaconda Plan was used during the American Civil War to "squeeze" the life out of the South. It was proposed by General Winfield Scott.

The plan called for the blockade of the Southern ports. Then an advance down the Mississippi River was to cut the South in two. Like the coils of an anaconda snake suffocating its victim, the south would be squeezed until it returned to the Union.

The plan was approved by President Lincoln. Northern Generals, newspapers and the public made fun of the plan. After a year of fighting it was finally put into operation.

In the early days of the Civil War, Scott's proposed strategy for the war against the South had two prominent features. First, all ports in the seceding states were to be blockaded. Secondly, a strong column of perhaps 80,000 men should use the Mississippi River as a highway to push completely through the Confederacy.

A a relatively-small amphibious force of army troops transported by boats and supported by gunboats, should advance rapidly, capturing the Confederate positions down the river in sequence. It would be followed by a more traditional army, marching behind to secure victories.

The final battle would be for the forts below New Orleans. When they fell, the river would be in US hands from its source to its mouth, and the rebellion would be cut in two.

All content from Kiddle encyclopedia articles (including the article images and facts) can be freely used under Attribution-ShareAlike license, unless stated otherwise. Cite this article:
Anaconda Plan Facts for Kids. Kiddle Encyclopedia.