The Anaconda or green anaconda (Eunectes murinus) is one of the biggest snakes in the world.

This Is a anaconda It is a non-venomous boa species from South America. It is the thickest, heaviest, and second longest known living snake (behind the reticulated python). The term "anaconda" usually means this species.

This giant snake (which is also called the water boa) lives in swampy areas of tropical South America. It spends a lot of time in shallow water, hidden from unsuspecting prey. Anacondas give birth to live young; 20 to 40 baby snakes are born at one time. The largest specimens measured 17.1 feet long and weighed 215 pounds. 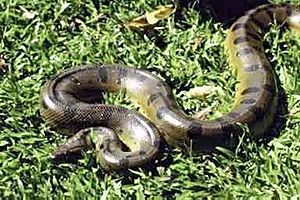 Green anaconda slithering in the grass

All snakes are carnivores (meat-eaters). Anaconda eat 4 to 5 times year because it takes 3 to 4 months to digest their food. Anacondas mostly hunt at night. Anacondas kill by constricting (squeezing) the prey until it can no longer breathe. Sometimes they drown the prey. Like all snakes, they swallow the prey whole, head first. The anaconda's top and bottom jaws are attached to each other with stretchy ligaments, which let the snake swallow animals wider than itself. Snakes do not chew their food, they digest it with quite strong acids in the snake's stomach. Anacondas eat pigs, deer, caiman (a type of crocodilian), birds, fish, rodents (like the capybara and agouti), and other animals. After eating a large animal, the anaconda needs no food for a long time, and rests for weeks. The young (called neonates) can care for themselves soon after birth, including hunting (but are pretty much defenseless against large predators). They eat small rodents (like rats and mice), baby birds, frogs and small fish.

There are four species in the genus Eunectes:

All content from Kiddle encyclopedia articles (including the article images and facts) can be freely used under Attribution-ShareAlike license, unless stated otherwise. Cite this article:
Anaconda Facts for Kids. Kiddle Encyclopedia.