The Reticulated python (Python reticulatus) is a species of python found in Southeast Asia. Adults can grow to 22.8 feet (6.95 m) in length but normally grow to an average of 9.8-19.7 feet. They are the world's longest snakes and longest reptile, but are not the most heavily built. Like all pythons, they are non-venomous constrictors (they squeeze their prey) and normally not considered dangerous to humans. Although large ones are powerful enough to kill an adult human, attacks are only sometimes reported. 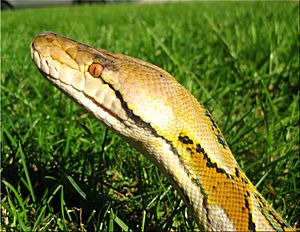 The reticulated python is the largest snake native to Asia. More than a thousand wild reticulated pythons in southern Sumatra were studied and estimated to have a length range of 1.5 to 6.5 m (4.9 to 21.3 ft) and a weight range of 1 to 75 kg (2.2 to 165.3 lb). Reticulated pythons with lengths more than 6 m (19.7 ft) are rare, though according to the Guinness Book of World Records, it is the only extant snake to regularly exceed that length.

A reticulated python of the same length as a green anaconda may weigh only half as much as the bulkier anaconda. One of the largest scientifically measured specimens, from Balikpapan, East Kalimantan, Indonesia, was measured under anesthesia at 6.95 m (22.8 ft) and weighed 59 kg (130 lb) after not having eaten for nearly 3 months. Widely published reports of specimens that were several feet longer have not been confirmed.

The specimen once widely accepted as the largest-ever "accurately" measured snake, that being Colossus, a specimen kept at the Highland Park Zoo (now the Pittsburgh Zoo and PPG Aquarium) in Pittsburgh, Pennsylvania, during the 1950s and early 1960s, with a peak reported length of 8.7 metres (28 ft 7 in) from a measurement in November 1956, was later shown to have been substantially shorter than previously reported. When Colossus died on April 14, 1963, its body was deposited in the Carnegie Museum of Natural History. At that time, its skeleton was measured and found to be 20 ft 10 in (6.35 m) in total length, and the length of its fresh hide was measured as 23 ft 11 in (7.29 m) – both measurements being significantly shorter than what had been previously estimated in 1956. The hide tends to stretch from the skinning process, thus may be longer than the snake from which it came – e.g., by roughly 20–40% or more. 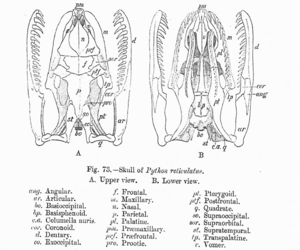 Numerous reports have been made of larger snakes, but since none of these was measured by a scientist nor any of the specimens deposited at a museum, they must be regarded as unproven and possibly erroneous.

The colour pattern is a complex geometric pattern that incorporates different colours. The back typically has a series of irregular diamond shapes flanked by smaller markings with light centers. In this species' wide geographic range, much variation of size, colour, and markings commonly occurs. 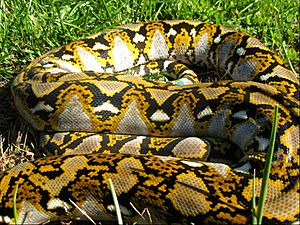 In zoo exhibits, the colour pattern may seem garish, but in a shadowy jungle environment amid fallen leaves and debris, it allows them to virtually disappear. Called disruptive colouration, it protects them from predators and helps them to catch their prey.

The number and arrangement of scales on a snake's body are a key element of identification to species level. The smooth dorsal scales are arranged in 69–79 rows at midbody. Deep pits occur on four anterior upper labials, on two or three anterior lower labials, and on five or six posterior lower labials.

Three subspecies have been proposed, but are not recognized in the Integrated Taxonomic Information System. The color and size can vary a great deal among the subspecies described. Geographical location is a good key to establishing the subspecies, as each one has a distinct geographical range.

The reticulated python lives in rain forests, woodlands, and nearby grasslands. It is also associated with rivers and is found in areas with nearby streams and lakes. An excellent swimmer, it has even been reported far out at sea and has consequently colonized many small islands within its range. During the early years of the 20th century, it is said to have been common even in busy parts of Bangkok, sometimes eating domestic animals. 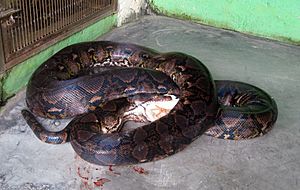 A specimen in captivity eating a chicken

As with all pythons, the reticulated python is an ambush hunter, usually waiting until prey wanders within strike range before seizing it in its coils and killing by constriction. Its natural diet includes mammals and occasionally birds. Small specimens up to 3–4 m (9.8–13.1 ft) long eat mainly rodents such as rats, whereas larger individuals switch to prey such as small Indian civet and binturong, primates, and pigs weighing more than 60 kg (130 lb). As a rule, the reticulated python seems able to swallow prey up to one-quarter its own length and up to its own weight. Near human habitation, it is known to snatch stray chickens, cats, and dogs on occasion. Among the largest documented prey items are a half-starved sun bear of 23 kg (51 lb) that was eaten by a 6.95 m (22.8 ft) specimen and took some 10 weeks to digest.

All content from Kiddle encyclopedia articles (including the article images and facts) can be freely used under Attribution-ShareAlike license, unless stated otherwise. Cite this article:
Reticulated python Facts for Kids. Kiddle Encyclopedia.