Port Hudson is an unincorporated community in East Baton Rouge Parish, Louisiana, United States. Located about 20 miles (32 km) northwest of Baton Rouge, it is known primarily as the location of an American Civil War battle, the siege of Port Hudson in 1863. 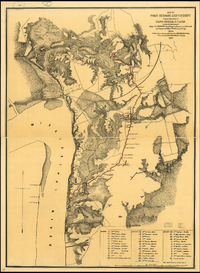 In 1833, one of the first railroads in the United States was built from Port Hudson to Clinton. Clinton was the entrepôt for the produce of much of the region, which, sent by rail, was transferred to steamboats at Port Hudson. Old Port Hudson was incorporated as a town in 1838.

What were then called the 1st and 3rd Regiments of the Louisiana Native Guards (later re-formed as regiments of the United States Colored Troops) proved themselves in battle on the Union side; they were the first black troops to have some black officers. A minority of men in the regiments were free men of color, who had been educated before the war; most of the soldiers were African-American slaves who had escaped to Union lines to gain freedom and support the war.

Port Hudson National Cemetery was established in the area, first as a place of burial of Union dead.

The latter poem was translated into German and published as a broadside, a copy of which has been preserved in the Black Soldiers Collection of the Historic New Orleans Collection at the Williams Research Center in New Orleans. 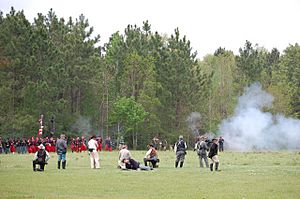 All content from Kiddle encyclopedia articles (including the article images and facts) can be freely used under Attribution-ShareAlike license, unless stated otherwise. Cite this article:
Port Hudson, Louisiana Facts for Kids. Kiddle Encyclopedia.