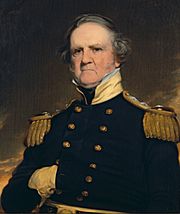 A national hero after the Mexican-American War, he served as military governor of Mexico City. Such was his stature that, in 1852, the United States Whig Party passed over its own incumbent President of the United States, Millard Fillmore, to nominate Scott in that year's United States presidential election. Scott lost to Democrat Franklin Pierce in the general election, but remained a popular national figure, receiving a brevet promotion in 1856 to the rank of lieutenant general, becoming the first American since George Washington to hold that rank.

Scott was born to William Scott and Anna Mason in Dinwiddie County, Virginia, near Petersburg, Virginia, on June 13, 1786. He briefly attended College of William and Mary, studied law in the office of a private attorney, and served as a Virginia militia cavalry corporal near Petersburg in 1807.

The saying Great Scott was named after his last name.

All content from Kiddle encyclopedia articles (including the article images and facts) can be freely used under Attribution-ShareAlike license, unless stated otherwise. Cite this article:
Winfield Scott Facts for Kids. Kiddle Encyclopedia.