Scott County is a county located in the U.S. state of Virginia. As of the 2010 census, the population was 23,177. Its county seat is Gate City. Scott County was formed by an act of the General Assembly on November 24, 1814 from parts of Washington, Lee, and Russell Counties and was named for Virginia born General Winfield Scott. Scott County is part of the Kingsport–Bristol–Bristol, TN-VA Metropolitan Statistical Area, which is a component of the Johnson City–Kingsport–Bristol, TN-VA Combined Statistical Area, commonly known as the "Tri-Cities" region. The County Administrator is Freda Russell Starnes.

The early settlers found evidence of a former native village at the mouth of Stony Creek on the Clinch river.

Thomas McCulloch was the first white settler within the county, in 1769. Daniel Boone commanded several forts located here in 1774 during Dunmore's War, and several more were built in successive years. Even so, the Chickamauga Cherokee leader Bob Benge remained active in the area throughout this time, during the Cherokee–American wars, up until he was killed in 1794. By the times houses were built in the 1790s, the largely Scots-Irish population had increased by reason of its situation along the Wilderness Road. After Scott County was formed in 1814, the first court took place in 1815, and the first public schools in 1870. 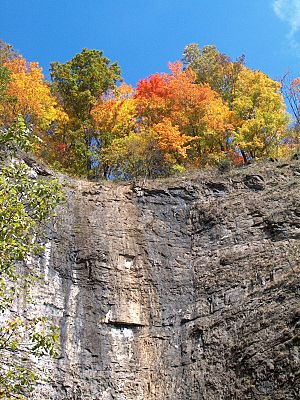 All content from Kiddle encyclopedia articles (including the article images and facts) can be freely used under Attribution-ShareAlike license, unless stated otherwise. Cite this article:
Scott County, Virginia Facts for Kids. Kiddle Encyclopedia.