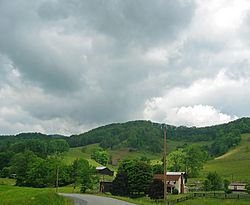 Lee County is the westernmost county in the U.S. Commonwealth of Virginia. As of the 2015 estimate, the population was 24,742. Its county seat is Jonesville.

The first Europeans to enter what is present-day Lee County were a party of Spanish explorers, Juan de Villalobos and Francisco de Silvera, sent by Hernando de Soto in 1540, in search of gold.

The county was formed in 1793 from Russell County. It was named for Light Horse Harry Lee, the Governor of Virginia from 1791 to 1794, who was famous for his exploits as a leader of light cavalry during the American Revolutionary War. He was also the father of the Confederate General Robert E. Lee.

Lee County was the final front on the Kentucky Trace, now known as the Wilderness Road and The Trail of the Lonesome Pine. During the 1780s and 1790s, fortified buildings called "stations" were built along the trail for shelter from Indian raids as the settlers followed Daniel Boone's footsteps into Kentucky. The stations in Lee County were Yoakum Station at present-day Dryden, west to Powell River and Station Creek at today's Rocky Station, then to Mump's Fort at Jonesville, followed by Prist Station, Chadwell Station at Chadwell Gap, Martin's Station at Rose Hill, Owen Station at Ewing, and finally Gibson Station, which still bears its original name.

One of the largest early landowners in the was Revolutionary War officer and explorer Joseph Martin, whom Martin's Station and Martin's Creek at Rose Hill are named for. Because of his rank, Martin had been awarded some 25,000 acres (100 km2), which he later divided up and sold.

All content from Kiddle encyclopedia articles (including the article images and facts) can be freely used under Attribution-ShareAlike license, unless stated otherwise. Cite this article:
Lee County, Virginia Facts for Kids. Kiddle Encyclopedia.