The park lies in parts of Bell and Harlan counties in Kentucky, Claiborne County in Tennessee, and Lee County in Virginia. The park contains the Kentucky-Virginia-Tennessee tri-state area, accessible via a short trail. 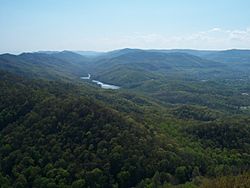 The gap was long used by Native Americans, as many species of migratory animals passed through it from north to south each year. It was fertile hunting territory and the only easy cut through the mountains from the southern wintering grounds of wild deer and buffalo to their northern summer range. Starting around 1775, the Gap became the primary route of transit for American settlers moving west into Kentucky; between 1775 and 1810 as many as 300,000 settlers may have used the Gap.

Two families by the name of Hensley and Gibbons moved to Brush Mountain to escape the many changes that were taking place in the early 1900s. Eventually, more family members followed and a community was begun. A church and school was established under the jurisdiction of the Bell County School System of Bell County, Kentucky.

Settlers continued their pioneer lifestyle until future generations began accepting employment and marriage partners off the mountain. Sherman Hensley, the founder of the settlement, was the last to leave in 1951. 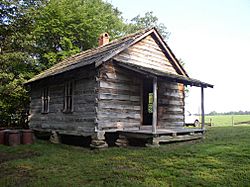 The park preserves the natural beauty of the surrounding area while focusing on historic preservation. Included in the park is Hensley Settlement, an early 20th-century Kentucky mountain community that has been preserved by the park service as representative of the early settler's life on top of Brush Mountain. 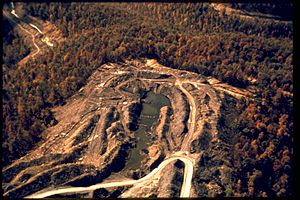 Tours through the old Hensley Settlement, trips into Gap Cave, also known as Cudjo's Cave, (once used for shelter by traveling Indians and settlers), living history events, campfire programs and demonstrations of the settlers' lifestyle provide a glimpse of life in the past, Appalachian music festivals and concerts provide another view of the life in this area.

The former roadbed of U.S. Highway 25E through the park has been restored to an early 19th-century wagon path. This was made possible with the 1996 completion of the Cumberland Gap Tunnel, which rerouted US 25E under the park..

The Cumberland Gap is a large natural break in the Appalachian Mountains. Historically, the gap was fertile hunting ground used by Native Americans. About 1775, it became the main route for settlers moving west into Kentucky. Between 1775 and 1810 as many as 300,000 settlers may have used the gap. Tours are led to the park's Hensley Settlement, an early 20th century Kentucky mountain community, and trips are made to Gap Cave which was once used for shelter by traveling Indians and settlers. Appalachian music festivals and concerts are held in the park.

All content from Kiddle encyclopedia articles (including the article images and facts) can be freely used under Attribution-ShareAlike license, unless stated otherwise. Cite this article:
Cumberland Gap National Historical Park Facts for Kids. Kiddle Encyclopedia.