Claiborne County is a county located in the U.S. state of Tennessee. As of the 2010 census, the population was 32,213. Its county seat is Tazewell.

Claiborne County was established on October 29, 1801, created from Grainger and Hawkins counties and extended the southern boundary to Anderson County. It was named for Virginia tidewater aristocrat William C. C. Claiborne, one of the first judges of the Tennessee Superior Court and one of the first representatives in U.S. Congress from Tennessee.

Like many East Tennessee counties, Claiborne County was largely opposed to secession on the eve of the Civil War. In Tennessee's Ordinance of Secession referendum on June 8, 1861, the county's residents voted against secession by a margin of 1,243 to 250.

The Four Seasons Hotel was built on the location of present-day Lincoln Memorial University in 1892 by an English land company, the American Association Limited, which was led locally by flamboyant businessman Alexander Arthur. At the time, it was reported by its promoters to be the largest hotel in the United States. The main building was four stories high with a lobby 75 feet square and a dining room 50 feet by 160 feet. It was reported to contain 700 rooms. Also included in the complex were a hospital, an inn, a sanitarium, and other smaller buildings. The hotel was not a success and was demolished in 1895. During its operation, the Four Seasons Hotel offered buggy rides to nearby English Cave, which had been improved with wooden stairways, walkways, and bridges. The rotting remains of these wooden structures can still be seen in the cave. 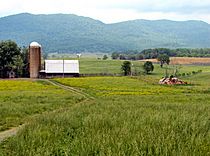 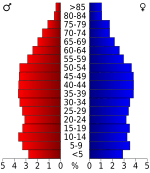 All content from Kiddle encyclopedia articles (including the article images and facts) can be freely used under Attribution-ShareAlike license, unless stated otherwise. Cite this article:
Claiborne County, Tennessee Facts for Kids. Kiddle Encyclopedia.