Campbell County is a county in the U.S. state of Tennessee. It is located on the state's northern border in East Tennessee. As of the 2020 census, its population was 39,272. Its county seat is Jacksboro.

Campbell County is included in the Knoxville metropolitan statistical area.

Campbell County was formed in 1806 from parts of Anderson and Claiborne counties. It was named in honor of Colonel Arthur Campbell (1743–1811), a member of the Virginia House of Burgesses and an officer during the American Revolutionary War.

New Mammoth Cave, located in Elk Valley, just west of Jellico, was mined for saltpeter (the main ingredient of gunpowder) during the War of 1812. It is possible that this cave was also mined during the Civil War. In 1921 the cave was developed as a tourist attraction and was open to the public until at least 1928. Today, New Mammoth Cave is securely gated by the U.S. Fish and Wildlife Service and is a sanctuary for bats, including the federally endangered Indiana bat.

Campbell County is situated amidst a geological border region between the Cumberland Plateau in the northwest and the Appalachian Ridge-and-Valley Range in the southeast. This border area is characterized by several large, elongate ridges, namely Cross Mountain in the west and Cumberland Mountain, Walnut Mountain, and Pine Mountain to the north. Elevations vary widely across the county, ranging from 3,534 feet (1,077 m) at Cross Mountain to slightly less than 1,000 feet (300 m) a few miles away at Norris Lake. Norris Lake— an artificial reservoir created by the Tennessee Valley Authority in the 1930s— is the main body of water in the region. It is fed by the Clinch and Powell rivers as well as several large creeks, most notably Davis Creek, Big Creek, and Cove Creek. Cove Creek also feeds the much smaller Cove Lake— a recreational lake built by TVA in the 1930s as part of the Norris project— which is located near Caryville. 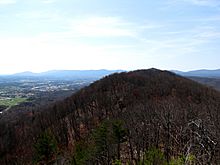 Most of the county's residents live in the southern half of the county, where La Follette, Jacksboro, and Caryville are located. Jellico, located along the Tennessee-Kentucky border, is the most notable populated area in the county's plateau section. 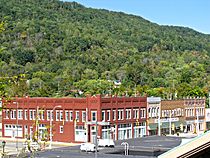 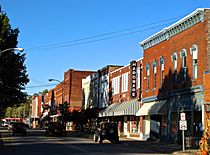 The Cumberland Plateau section of Campbell County is part of the massive Appalachian coalfield that dominates much of Central Appalachia, thus the Jellico section of the county has more in common economically with southeastern Kentucky and West Virginia, whereas the southern parts of the county economically resemble East Tennessee. The coal seams near Jellico produced a slow-burning bituminous coal that helped make Campbell County Tennessee's largest coal-producing county in the early 20th century.

Campbell County is home to Norris Lake and the Royal Blue Trails Complex. Much of Norris Lake is along its southern boundary, as well as several wildlife management areas such as the North Cumberland Wildlife Management Area, which includes the Royal Blue Trails. Campbell County boasts 11 marinas on Norris Lake, drawing tens of thousands of visitors annually. The county is home to Lonus Young County Park on Norris Lake and four state parks: Cove Lake State Park near Caryville, Indian Mountain State Park near Jellico, Norris Dam State Park near Rocky Top, and the Cumberland Trail State Park coursing the mountaintops overlooking LaFollette, Jacksboro, and Caryville from Speedwell in the east to the southern reaches of the county near one of the last railroad water tanks near the Shea community. Over a million visitors frequent the Tennessee Welcome Center along I-75 at Jellico each year.

All content from Kiddle encyclopedia articles (including the article images and facts) can be freely used under Attribution-ShareAlike license, unless stated otherwise. Cite this article:
Campbell County, Tennessee Facts for Kids. Kiddle Encyclopedia.