Norris Dam is a hydroelectric and flood control structure located on the Clinch River in Anderson County and Campbell County, Tennessee, United States. Its construction in the mid-1930s was the first major project for the Tennessee Valley Authority, which had been created in 1933 to bring economic development to the region and control the rampant flooding that had long plagued the Tennessee Valley. The dam was named in honor of Nebraska Senator George Norris (1861–1944), a longtime supporter of government-owned power in general, and supporter of TVA in particular. The project infrastructure was listed on the National Register of Historic Places in 2016.

The Clinch River flows southwestward for 300 miles (480 km) from its headwaters in Virginia through the rugged, sparsely populated hills of northeastern Tennessee before emptying into the Tennessee River near Kingston. Norris Dam is located at just over 79 miles (127 km) upstream from the mouth of the Clinch, immediately downstream from the river's confluence with Cove Creek, which joins the river from the northwest. The reservoir includes parts of Anderson, Campbell, Union, Claiborne, and Grainger counties. Norris Reservoir spans a 73-mile (117 km) stretch of the Clinch from the dam to River Ridge at the Claiborne-Grainger county line. The reservoir also covers the lower 56 miles (90 km) of the Powell River, which empties into the Clinch 10 miles (16 km) upstream from Norris Dam. The dam's tailwaters are part of Melton Hill Lake, which stretches for 56 miles (90 km) along the Clinch from Norris to Melton Hill Dam.

Norris Freeway, a section of U.S. Highway 441 widened in the 1930s to aid in dam construction, crosses the top of Norris Dam and connects the area to Interstate 75 at Rocky Top, Tennessee to the west and Knoxville, Tennessee to the south. Along with the reservation maintained by TVA for the operation of Norris Dam, most of the lower Norris Reservoir is surrounded by conservation lands, including Norris Dam State Park adjacent to the reservation, the Cove Creek Wildlife Management Area across the lake to the north, and the Chuck Swan State Forest, which protects a large undeveloped area a few miles upstream. 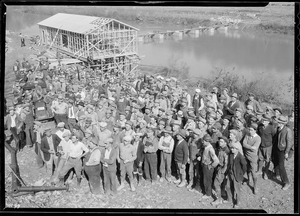 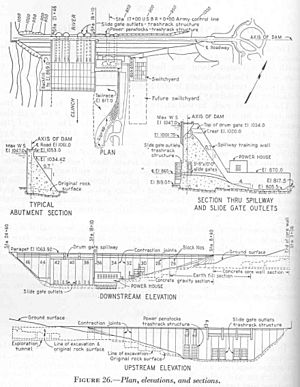 As early as 1911, the present site of Norris Dam—initially called the "Cove Creek site"—was identified as a prime location for a sizeable dam. Several government and private entities believed that a dam in the upper Tennessee Valley, working in conjunction with dams at Muscle Shoals, Alabama, could provide badly needed flood control to East Tennessee and help keep the Tennessee River consistently navigable year-round. In the early 1920s, several entities—including the Tennessee Electric Power Company (TEPCo), the Knoxville Power & Light Company, and Union Carbide— applied for permits to build a dam at the Cove Creek site, although all were eventually withdrawn or rejected. Part of the opposition was from Senator Norris, who advocated a government-sponsored dam at the site, arguing that a private entity would be almost wholly concerned with power generation rather than flood control and coordination with projects elsewhere in the valley. Norris proposed constructing a network of dams throughout the valley to help regulate its outflow into the lower Mississippi River. Throughout the late 1920s, the U.S. Army Corps of Engineers made several proposals to build a dam at the site, but all were rejected by Congress or vetoed by President Calvin Coolidge.

The Tennessee Valley Authority was formed in 1933 as part of President Franklin D. Roosevelt's New Deal legislation. The act authorizing TVA's establishment (signed on May 18, 1933) authorized TVA to immediately begin construction on a dam at the Cove Creek site. On July 30, TVA renamed the Cove Creek project for Senator Norris and began preparations for the dam's construction. As the agency lacked any engineering or dam construction experience, it relied heavily on the Army Corps' original design, and received ample consulting from the U.S. Bureau of Reclamation. Hungarian-American architect Roland Wank (1898–1970) revised the initial plans from Bureau of Reclamation engineers, and gave the poured-concrete Norris Dam a modernist style, which was controversial and advanced for the era of construction, but the result would eventually succeed in elevating Roland Wank to the position of Chief Architect for TVA from 1933 through 1944. Construction began on October 1, 1933. 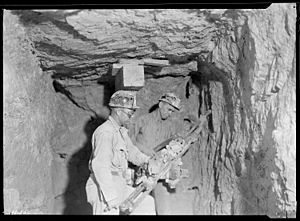 "Arthur Roberts and Sam Mynatt drilling in lateral test shaft for examination of substrata at base of Norris Dam." Photograph taken by Lewis Hine October 27, 1933

The building of Norris Dam and its accompanying reservoir required the purchase of over 152,000 acres (62,000 ha) of land. 2,841 families and 5,226 graves were relocated. The community of Loyston, located about 20 miles (32 km) upstream from the dam site, was entirely inundated. Approximately one-third of Caryville, at the head of the reservoir's Cove Creek embayment, was flooded and a number of structures in the town had to be moved. Several smaller 30-foot (9.1 m) earthen dams were built along reservoir tributaries to house fish hatcheries. As the project called for the construction of recreational areas along the lakeshore, TVA built two supplemental dams—Caryville Dam and Big Ridge Dam—to impound Cove Lake and Big Ridge Lake, respectively, and ensure these small lakes would remain filled year-round. The Civilian Conservation Corps built recreational facilities and aided in the removal of various structures. The town of Norris, Tennessee was initially built as a planned community to house the workers involved in the construction of this dam.

Norris Dam was completed and the gates closed on March 4, 1936, constructed at a cost of $36 million. The dam's first generator went online July 28, 1936. Although Norris was the first dam built by TVA, it is not the oldest dam owned and operated by the agency. TVA subsequently purchased the assets of the former Tennessee Electric Power Company, including some dams which had been built prior to Norris Dam.

The building of Norris Dam and the changes it brought to the region inspired films, books, stage plays, and songs. Folk songs from the construction period express enthusiasm for the benefits that the dam project brought to the region. Notable visitors to the dam included President Franklin D. Roosevelt and First Lady Eleanor Roosevelt, French philosopher Jean-Paul Sartre, journalist Ernie Pyle, Swiss architect Le Corbusier, track star Jesse Owens, and Indian Prime Minister Jawaharlal Nehru. In 1941, the dam was the subject of a photography exhibit at the Museum of Modern Art in New York.

All content from Kiddle encyclopedia articles (including the article images and facts) can be freely used under Attribution-ShareAlike license, unless stated otherwise. Cite this article:
Norris Dam Facts for Kids. Kiddle Encyclopedia.