Union County is a county located in the U.S. state of Tennessee. As of the 2010 census, the population was 19,109. Its county seat is Maynardville.

Union County was formed in 1850 from portions of Grainger, Claiborne, Campbell, Anderson and Knox counties. There are at least two theories on the source of its name. The name may commemorate the "union" of sections of five counties, or it may reflect East Tennessee's support for the preservation of the Union in the years before the Civil War. The county seat was originally named "Liberty," but renamed "Maynardville" in honor of attorney and congressman, Horace Maynard, who had defended the county in a court case that sought to block its formation.

In the 1930s, the damming of the Clinch River by Norris Dam to form Norris Lake inundated a large part of the county, including the community of Loyston, and displaced many residents. With assistance from the National Park Service and the Civilian Conservation Corps (CCC), the Tennessee Valley Authority (TVA) developed Big Ridge State Park as a demonstration park on the shore of the lake in Union County. The park's recreational facilities opened in May 1934.

According to the U.S. Census Bureau, the county has a total area of 247 square miles (640 km2), of which 224 square miles (580 km2) is land and 24 square miles (62 km2) (9.5%) is water. The county is situated in the Ridge-and-Valley Appalachians, a range characterized by long, narrow ridges alternating with similarly-shaped valleys. Prominent ridges in Union County include Copper Ridge, Hinds Ridge and Lone Mountain. The southern end of Clinch Mountain forms part of the county's border with Grainger County to the east.

The Clinch River, Union County's primary stream, flows through the northern part of the county. This section of the river is part of Norris Lake. Big Ridge Dam, a small non-generating dam, impounds an inlet of Norris Lake, creating Big Ridge Lake at Big Ridge State Park. The "Loyston Sea," one of the widest sections of Norris Lake, is located in Union County just north of the state park. 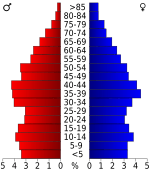 The old Hamilton-Lay store at Hamilton Crossroads, east of Maynardville

All content from Kiddle encyclopedia articles (including the article images and facts) can be freely used under Attribution-ShareAlike license, unless stated otherwise. Cite this article:
Union County, Tennessee Facts for Kids. Kiddle Encyclopedia.