Kenneth Arnold Chesney (born March 26, 1968) is an American country music singer, songwriter, and record producer. He has recorded 20 albums, 14 of which have been certified Gold or higher by the RIAA. He has also produced more than 40 Top 10 singles on the US Billboard Hot Country Songs and Country Airplay charts, 29 of which have reached number one. Many of these have also charted within the Top 40 of the US Billboard Hot 100, making him one of the most successful crossover country artists. He has sold over 30 million albums worldwide.

Chesney co-directed and produced a film for ESPN entitled The Boys of Fall. He has received six Academy of Country Music awards (including four consecutive Entertainer of the Year awards from 2005 to 2008), as well as six awards from the Country Music Association. He is one of the most popular touring acts in country music, regularly selling out the venues in which he performs. His 2007 Flip-Flop Summer Tour was the highest-grossing country road trip of the year. 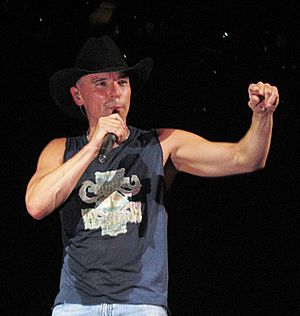 Chesney was born in Knoxville, Tennessee, at St. Mary's Medical Center and was raised in Luttrell, and is of English and Irish descent. He is the son of David Chesney, a former elementary school teacher, and Karen Chandler, a hair stylist in the Knoxville area. Chesney has one sibling, a younger sister.

In 1986, Chesney graduated from Gibbs High School, where he played baseball and football. He received his first guitar, "The Terminor", for Christmas and began teaching himself how to play it. Chesney studied advertising at East Tennessee State University in Johnson City, where he was a member of the ETSU Bluegrass Program and the Lambda Chi Alpha fraternity and graduated in 1990.

In 1982, Kenny won the best male yodeler at the International Yodeling Championship in Zurich, Switzerland. In 1989, he recorded a self-released demo album at the Classic Recording Studio in Bristol, Virginia. He sold 1,000 copies while performing at the local clubs in Johnson City and used the money from album sales to help himself buy a new guitar. After graduation from East Tennessee State in 1990, he headed to Nashville and performed at several local clubs. He became the resident performer at The Turf, a honky tonk bar in the city's historic district. 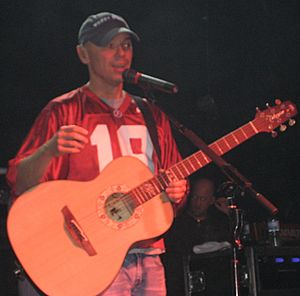 In 1992, the head of writer relations at BMI recommended Chesney to his friend, Troy Tomlinson, at Opryland Music Group. Chesney performed five songs during his audition for Tomlinson. Tomlinson's reaction was enthusiastic. Chesney left the audition with a songwriter's contract. A year later, an appearance at a songwriter's showcase led to a contract with Capricorn Records, which had recently started a country division.

On May 9, 2005, Chesney married actress Renée Zellweger in a ceremony on the island of St. John. They had met in January at a tsunami relief event. On September 15 of that same year, after only four months of marriage, they announced their plans for an annulment. The annulment was finalized in late December 2005.

In 2017, Chesney came to the aid of the U.S. and British Virgin Islands victims of Hurricane Irma, one of whom was given a free lift to the mainland United States. Chesney owns a mansion on St. John in the U.S Virgin Islands, where many stayed to weather the storm. Chesney also set up a charitable fund, Love for Love City, to help victims of the storm. Chesney will donate all proceeds from Songs for the Saints to the fund. 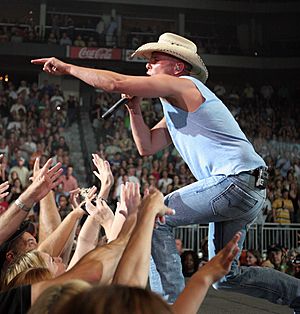 Kenny Chesney during a performance in Jacksonville, Florida 2008

All content from Kiddle encyclopedia articles (including the article images and facts) can be freely used under Attribution-ShareAlike license, unless stated otherwise. Cite this article:
Kenny Chesney Facts for Kids. Kiddle Encyclopedia.