Foxborough is a town in Norfolk County, Massachusetts, United States, about 22 miles (35 km) southwest of Boston and 18 miles (29 km) northeast of Providence, Rhode Island. The population was 16,865 at the 2010 census.

"Foxborough" is the official spelling of the town name, although the alternative spelling "Foxboro" is also frequently used. This alternative spelling is used by the United States Postal Service as the correct form by which to address mail to recipients in the town although both can be processed by their system. The sign on the post office reads "Foxboro."

The town is best known as the site of Gillette Stadium, home of the New England Patriots of the National Football League and the New England Revolution of Major League Soccer. 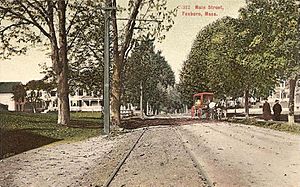 Settled in 1704 and incorporated in 1778, the town of Foxborough was named for Charles James Fox, a Whig member of Parliament and a staunch supporter of the Colonies in the years leading up to the American Revolution.

The town was once home to the world's largest straw hat factory. Founded by local businessman E.P. Carpenter, the Union Straw Works burned to the ground in the early 20th century. The town post office now stands on the site.

Foxborough was composed of small neighborhood communities until the early 1900s. These included Foxvale/Paineburgh, which remained semi-independent until the mid-twentieth century; Quaker Hill in South Foxborough; and Lakeview/Donkeyville in West Foxborough.

Schaefer Stadium (later known as Sullivan Stadium, then Foxboro Stadium) opened in 1971 as the home of the New England Patriots, after the football team spent its first eleven seasons playing at various stadiums in Boston. The family of Billy Sullivan owned both the Patriots and the stadium until they sold the team in 1988. The stadium, however, lapsed into bankruptcy and was then bought by paper magnate Robert Kraft. With Kraft in control of Foxboro Stadium, he prevented the Patriots from relocating to St. Louis in 1994 by refusing to let the team break their lease, then bought the Patriots outright. Kraft then founded the New England Revolution, one of the charter clubs of Major League Soccer, in 1996.

Gillette Stadium opened in 2002 as a replacement for Foxboro Stadium. The Patriot Place shopping plaza, built on land surrounding the stadium bought by Kraft, completed construction in 2009. The plaza includes a variety of restaurants, clothing stores, and other retailers.

Foxborough's climate is humid continental (Köppen: Dfa) with four distinct seasons, which is the predominant climate for Massachusetts and New England. Summers are typically warm to hot, rainy, and humid, while winters are cold, windy, and snowy. Spring and fall are usually mild, but conditions are widely varied, depending on wind direction and jet stream positioning. The warmest month is July, with an average high temperature of 83 °F and an average low temperature of 62 °F. The coldest month is January, with an average high temperature of 36 °F and an average low temperature of 18 °F. Periods exceeding 90 °F in summer and below 10 °F in winter are not uncommon but rarely extended, with about 14 days per year seeing the former extreme. Because of the town's relatively short distance from the Atlantic Ocean, temperatures tend to remain warmer than locations further inland. Like the rest of the northeastern seaboard, precipitation is distributed fairly evenly throughout the entire year, with the winter months receiving slightly more precipitation than the summer months. Powerful storm systems known as Nor'easters can produce heavy amounts of rain and snow at any time of the year, but these storms most often strike during the winter months, causing significant snowfall amounts and blizzard conditions. Thunderstorms occur somewhat frequently in the summer, occasionally bringing heavy downpours, damaging winds, and hail. Tornado activity is relatively low in the area, although there have been a fair share of tornado warnings issued over the years. Due to its location along the United States eastern seaboard, Foxborough is somewhat vulnerable to Atlantic hurricanes and tropical storms that threaten the region from late summer into early autumn.

There were 6,141 households out of which 35.3% had children under the age of 18 living with them, 59.9% were married couples living together, 8.6% had a female householder with no husband present, and 28.4% were non-families. 23.4% of all households were made up of individuals and 8.6% had someone living alone who was 65 years of age or older. The average household size was 2.63 and the average family size was 3.15.

The built-up central business district is designated by the United States Census Bureau as the Foxborough Census Designated Place for record keeping purposes (this is common among many larger population New England towns.)

There were 2,486 households out of which 25.9% had children under the age of 18 living with them, 41.9% were married couples living together, 9.5% had a female householder with no husband present, and 44.8% were non-families. 37.8% of all households were made up of individuals and 13.6% had someone living alone who was 65 years of age or older. The average household size was 2.18 and the average family size was 2.95. 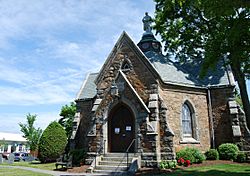 All content from Kiddle encyclopedia articles (including the article images and facts) can be freely used under Attribution-ShareAlike license, unless stated otherwise. Cite this article:
Foxborough, Massachusetts Facts for Kids. Kiddle Encyclopedia.