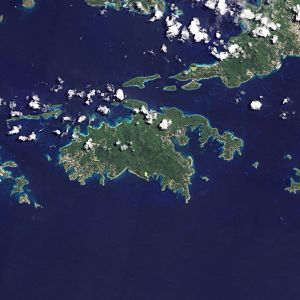 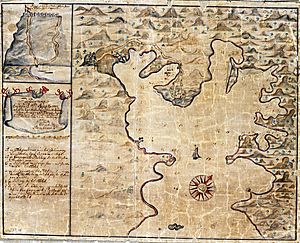 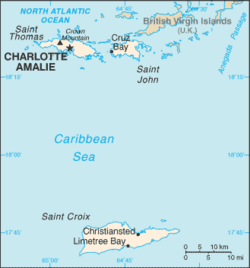 Map of the U.S. Virgin Islands

At 50 km2 the smallest of the three main US Virgin Islands, Saint John is located about four miles east of Saint Thomas, the location of the territory's capital, Charlotte Amalie. It is also four miles southwest of Tortola, part of the British Virgin Islands. Its largest settlement is Cruz Bay with a population of 2,700. Saint John's nickname is Love City.

Since 1956, approximately 60% of the island is protected as Virgin Islands National Park, administered by the United States National Park Service. The economy is based predominantly on tourism and related trade.

Petroglyphs and artifacts found at Cinnamon Bay indicate a Taíno presence on Saint John from about 700 to the late 1400s.

Christopher Columbus passed by St. John on his second voyage in 1493, but did not come ashore. He named the northern Virgin Islands Las Once Mil Virgenes. 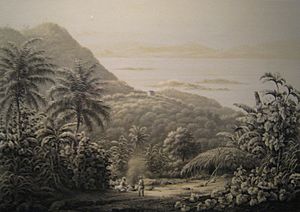 The Danish West India Company resettled St. Thomas in 1671, and an African slave market is established in 1673. Saint John was uninhabited when 20 Danish planters came over from St. Thomas in 1717. They grew sugar cane, cotton, and other crops. Annaberg sugar plantation is built in 1731, and becomes one of the island's largest sugar producers by the 1800s. By 1733, there are 109 plantations on the island, 21 of which are producing sugar. The islands became a crown colony in 1754.

The 1733 slave insurrection on St. John started when a small group of slaves entered Fort Frederiksvaern, on Fortsberg Hill in Coral Bay, with cane bills concealed within bundles of wood. The slaves, led by those formerly from Akwamu, overpowered and killed 5 of the 6 soldiers within the Danish fort. Firing the fort's cannon, the signal was given for the start of a six-month revolt, which only ended when French troops were brought in from Martinique.

Instead of submitting to captivity and slavery, more than a dozen men and women, including Breffu, one of the leaders, shot and killed themselves before the French forces reached them.

Moravian Brethren built the first church at Emmaus in 1749. Cruz Bay was established in 1766, and includes The Battery. 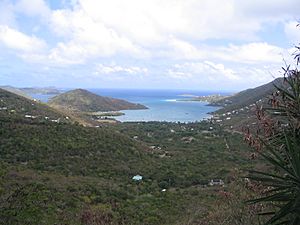 In 1917, during the First World War, the United States purchased the U.S. Virgin Islands for $25 million from the Danish government in order to establish a naval base. It was intended to prevent expansion of the German Empire into the Western Hemisphere. As part of the negotiations for this deal, the US agreed to recognize Denmark's claim to Greenland, which they had previously disputed.

During the 20th century, private investors acquired properties on the island, redeveloping some plantation houses as vacation resorts, such as Laurence Rockefeller's Caneel Bay Resort. The islands became popular and tourism and related service jobs developed as a major part of the economy. 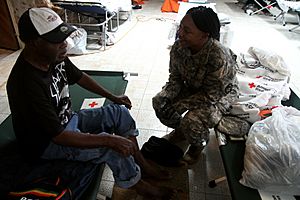 A Pennsylvania National Guard soldier speaking to a resident of St. John

In September 2017, Saint John was hit by Hurricane Irma. The category 5 storm forced roughly half of the island's 4,500 residents to evacuate and caused power outages that lasted for months. 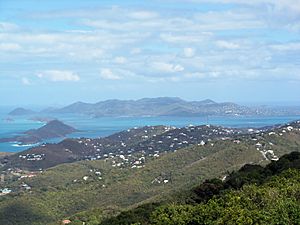 Since 1917, the U.S. Virgin Islands are an organized, unincorporated territory of the United States. Its residents are U.S. citizens, but they cannot vote in presidential elections.

Until 1970, governors of the territory were appointed by the US President. Since that year, residents of the island have elected a territorial governor and lieutenant governor, and fifteen senators to the legislature, representing all three islands. Seven are elected from the district of Saint Croix, seven from the district of Saint Thomas and Saint John, and one senator at-large (who must be a resident of Saint John) are elected for two-year terms to the unicameral Virgin Islands Legislature.

Residents of the Virgin Islands also elect a delegate to the US Congress, who has non-voting status in that body.

Saint John has no local government; however, the Governor appoints an administrator for the island. Having no official powers, this figure acts more as an adviser to the Governor and as a spokesperson for the Governor's policies. 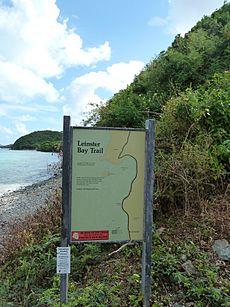 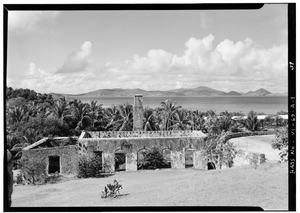 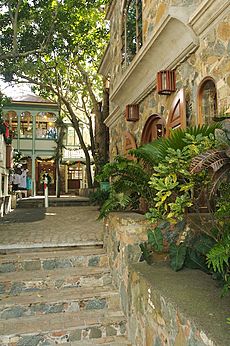 The main export of Saint John used to be sugar cane, which was produced in great quantity using African and Indian slave labor. However, this industry declined after the abolition of slavery, as it was dependent on free labor to be profitable. In addition, in that period, it had to compete with sugar produced in other areas, including by the use of sugar beets in northern locations.

The economy of Saint John is almost entirely dependent on tourism. The island has hundreds of rental villas as well as hotels and resorts. Numerous shops and restaurants serving both residents and tourists are located in Cruz Bay and Coral Bay.

In 1956, Laurance Rockefeller donated his extensive lands on the island to the United States' National Park Service, under the condition that the lands had to be protected from future development. The remaining portion, the Caneel Bay Resort, operates on a lease arrangement with the NPS, which owns the underlying land.

The boundaries of the Virgin Islands National Park include 75% of the island, but various in-holdings within the park boundary (e.g., Peter Bay) reduce the park lands to 60% of the island acreage.

Much of the island's waters, coral reefs, and shoreline have been protected by being included in the national park. This protection was expanded in 2001, when the Virgin Islands Coral Reef National Monument was created.

While Saint John does not have an airport, the island is served by Cyril E. King Airport on nearby St. Thomas. There used to be a seaplane base in the town of Cruz Bay. Antilles Airboats provided regular service until it was sold by Maureen O'Hara. The Virgin Islands Seaplane Shuttle also used to offer services to that seaplane base using Grumman Mallard air boats prior to Hurricane Hugo.

Cars and cargo are transported to the island via barge. Two companies offer barge service between Red Hook, St. Thomas and Cruz Bay, Saint John. The barges operate hourly during daylight hours. Although prohibited by Virgin Islands law, some rental car companies allow their vehicles to use the car ferry. This is because the U.S. District Court deemed the law to violate the Interstate Commerce Clause of the United States Constitution. However, as of 2017, the unconstitutional law is still technically on the books, but the Government of the Virgin Islands does not enforce it. Car rental companies are located throughout Cruz Bay, most within easy walking distance of the ferry dock.

All content from Kiddle encyclopedia articles (including the article images and facts) can be freely used under Attribution-ShareAlike license, unless stated otherwise. Cite this article:
Saint John, U.S. Virgin Islands Facts for Kids. Kiddle Encyclopedia.