Charlotte Amalie, located on the island of St. Thomas, is the capital and the largest city of the United States Virgin Islands, founded in 1666 as Taphus (meaning "beer house" or "beer hall"). In 1691, the town was renamed to Amalienborg (in English Charlotte Amalie) after Charlotte Amalie of Hesse-Kassel (1650–1714), queen consort to King Christian V of Denmark-Norway. It has a deep-water harbor that was once a haven for pirates and is now one of the busiest ports of call for cruise ships in the Caribbean, with about 1.5 million cruise ship passengers landing there in 2004. Protected by Hassel Island, the harbor has docking and fueling facilities, machine shops, and shipyards and was a U.S. submarine base until 1966. The town has been inhabited for centuries. When Christopher Columbus came here in 1493, the area was inhabited by Island Caribs and Taíno. It is on the southern shore at the head of Saint Thomas Harbor. In 2010 the city had a population of 18,481, which makes it the largest city in the Virgin Islands Archipelago. Hundreds of ferries and yachts pass through town each week, and at times the population more than doubles.

The city is known for its Danish colonial architecture, building structure and history, and a dozen streets and places throughout the city have Danish names. Charlotte Amalie has buildings of historical importance including St. Thomas Synagogue, the second-oldest synagogue in the Western Hemisphere, and Frederick Lutheran Church, the oldest Lutheran church in the Western Hemisphere. The town has a long history of pirates, especially stories of Bluebeard and Blackbeard (Edward Teach). In the 17th century, the Danes built both Blackbeard's Castle and Bluebeard's Castle attributed to the pirates. Blackbeard's Castle is a U.S. National Historic Landmark. Another tourist attraction is Fort Christian, the oldest standing structure in the Virgin Islands Archipelago. A copy of the Liberty Bell is in Emancipation Park, which is a tourist attraction.

The 2010 United States Census reported that Charlotte Amalie had a population of 18,481. 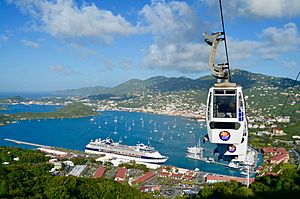 With more than 1.5 million cruise passengers per year, Charlotte Amalie is the busiest cruise port in the Caribbean.

The economy is based on tourism, handicrafts, jewelry, and the production of rum, bay rum, and jams. As well as being the USVI’s political capital, the city is the port capital of the U.S. Virgin Islands. Charlotte Amalie is the most popular cruise ship destination in the Caribbean Sea. Up to eleven cruise ships can occupy the harbor on any given day – though usually there are about five.

About 1.5 million cruise ship passengers visit on average per year.

Tourist attractions include Blackbeard's Castle which is one of the most visited attractions in the town, Bluebeard's Castle, 17th-century Fort Christian, the green and distinctive Legislature Building, the 99 steps stairway, Emancipation Garden, Market Square, Seven Arches Museum, St. Thomas Synagogue, Frederick Lutheran Church, and the Weibel Museum. Tourists usually either arrive by airplane at the Cyril E. King International Airport, approximately 2 miles (3.2 km) west of downtown Charlotte Amalie, or by landing at the cruise ship port in Havensight.

Because of its duty-free policies, the city is sometimes referred to as "the duty-free capital of the world". Charlotte Amalie has more jewelry shops and perfume vendors than anywhere else in the Caribbean and is known for its outdoor shopping Vendors' Plaza. On Main Street (Dronningens Gade) there are many major shops, including Tiffany, Breitling, Rolex, and Fresh Produce.

All content from Kiddle encyclopedia articles (including the article images and facts) can be freely used under Attribution-ShareAlike license, unless stated otherwise. Cite this article:
Charlotte Amalie, U.S. Virgin Islands Facts for Kids. Kiddle Encyclopedia.