Kids Encyclopedia Facts
Not to be confused with Buck Island National Wildlife Refuge.

Buck Island Reef National Monument, or just Buck Island is a small, uninhabited, 176 acre (712,000 m²) island about 1.5 miles (2.4 km) north of the northeast coast of Saint Croix, U.S. Virgin Islands. The monument also includes 18,839 acres of submerged lands totaling 19,015 acres. It was first established as a protected area by the U.S. Government in 1948, with the intention of preserving “one of the finest marine gardens in the Caribbean Sea.” The U.S. National Monument was created in 1961 by John F. Kennedy and greatly expanded in 2001 by Bill Clinton, over the bitter opposition of local fishermen. Buck Island National Monument is one of few places in the Virgin Islands where brown pelicans and threatened least terns nest. 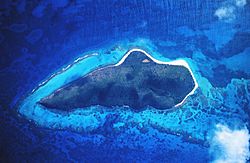 Buck Island Reef National Monument (Note that the photograph is taken from an unusual perspective. The beach is in fact to the west end of Buck Island and in this photograph north is facing downward).

Most of the Monument area, which is administered by the National Park Service, is underwater and attracts around 50,000 visitors a year. With its 4,554-acre (18.43 km2) long reef there is plenty to explore and experience in the water. Snorkelers can follow an underwater marked trail on the eastern tip. It is one of only three underwater trails in the United States. Along the trail are plaques denoting information about marine flora and fauna commonly found in the area. Two thirds of the island is surrounded by an elkhorn coral barrier reef, providing an ecosystem for over 250 fish species and a variety of other marine life including spotted eagle rays, nurse sharks and lemon sharks, and juvenile Blacktip reef sharks and Whitetip reef sharks. In the spring endangered Leatherback turtles come onto the beach to nest while Green turtles and Hawksbill turtles nest during the summer months. Turtle Beach on the western edge of the island features a pristine white sand beach and has been voted one of the world's most beautiful beaches by National Geographic.

The National Park Service has been monitoring Buck Island for over 40 years. Most of the research is focused on coral, fish, sea turtles, brown pelicans and least tern nesting. West beach is one of the most active turtle nesting beaches in the world with one the longest continually operating research programs.

The National Park Service requires all visitors to utilize Authorized Concessioners providing guided tours to ensure the ecosystem continues to thrive. Permits for private vessels without paying customers are also available. To help protect the natural environment, visitors are encouraged to wear non-toxic reef safe sunscreen (oxybenzone is the principal chemical to avoid; don't depend on the name of the sunscreen) or a rash guard while swimming in the waters surrounding Buck Island Reef National Monument.

There are actually two Buck Islands in the Virgin Islands. The one just north of St. Croix is the centerpiece of the National Monument. Buck Island National Wildlife Refuge is another offshore cay near St. Thomas.

All content from Kiddle encyclopedia articles (including the article images and facts) can be freely used under Attribution-ShareAlike license, unless stated otherwise. Cite this article:
Buck Island Reef National Monument Facts for Kids. Kiddle Encyclopedia.