The spotted eagle ray, (Aetobatus narinari), is a species of cartilaginous fish, in the eagle ray group. It can be found in tropical waters, including Hawaii, the Gulf of Mexico, off the coast of west Africa, Oceania, and the Indian Ocean.

The bottom of the head

Spotted eagle rays are around 17 to 35 cm wide at birth, but adults can be as long as 16 ft (5 meters), and have the wingspan of 3 meters (10 ft). An adult weighs 180 to 225 kg. The heaviest ever recorded weighed 230 kg. They have flat disk-shaped bodies, the top is dark blue or black in colour and is covered in white spots, and the belly is white. Spotted eagle rays also have flat snouts which look like a duck's bill. They have a long tail which is longer than most other ray's tails, and they have 2-6 venomous spines right behind their pelvic fins.

Spotted eagle rays prefer to swim in waters with the temperature of 24 to 27 °C (75 to 81 °F), and are more active during high tides. They are shy animals and usually avoid humans, but they have been seen leaping out of the water onto boats and landing on people. They search for their food by digging their snouts into the sand on the sea beds. Groups of them are made up of around 6 members swimming in the same direction, at exactly the same speed. Spotted eagle rays eat crustaceans including shrimp, prawns and crabs, molluscs like octopuses, clams and oysters. 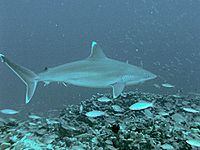 The Silvertip shark is a predator of the Spotted Eagle Ray

Spotted eagle rays live in shallow, coastal waters and coral reefs in tropical regions, including Hawaii, the Gulf of Mexico, Oceania, west Africa, the Indian Ocean and the west coast of the United States of America. They are found down to the depths of 80 meters. They can be found in the Atlantic Ocean, off the coast of North Carolina, down to Florida, in the Gulf Stream, in the Caribbean, and down pass the southern part of Brazil. In can also be found in the Pacific Ocean, from the Red Sea to South Africa, and northern Japan and Australia.

All content from Kiddle encyclopedia articles (including the article images and facts) can be freely used under Attribution-ShareAlike license, unless stated otherwise. Cite this article:
Spotted eagle ray Facts for Kids. Kiddle Encyclopedia.