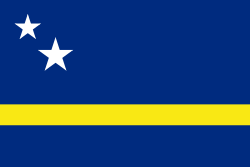 National coat of arms of Curaçao

Curaçao is an island in the Caribbean Sea, it is a part of the ABC islands and is just a short distance north of the Venezuelan Paraguaná Peninsula, and it forms a part of the Kingdom of the Netherlands. Willemstad is the capital of Curaçao.

The largest ethnic group belongs to the Afro-Caribbean group with about 85% of the entire population (also includes mulattos). The remaining 15-20% are people of mainly European (mainly Dutch) descent, but there is also Asians, Arabs, and others.

The island broke off from the Netherlands Antilles in 2010. It has a very long history set all the way back to the 1800s

All content from Kiddle encyclopedia articles (including the article images and facts) can be freely used under Attribution-ShareAlike license, unless stated otherwise. Cite this article:
Curaçao Facts for Kids. Kiddle Encyclopedia.