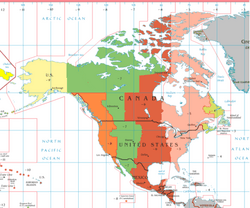 The Atlantic Standard Time Zone (AST) is a geographic region that keeps time by subtracting four hours from Greenwich Mean Time (GMT), resulting in GMT-4 (UTC-4). The clock time in this zone is based on the mean solar time of the 60th degree meridian west of the Greenwich Observatory.

The Canadian provinces of New Brunswick, Nova Scotia and Prince Edward Island keep time by subtracting four hours from UTC. So does Bermuda, an island territory in the North Atlantic. In the summer, both places use daylight saving time. They keep Atlantic Daylight Time (ADT) (UTC-3) in the summer.

Other parts of the world that keep time by subtracting four hours from UTC include: many Caribbean islands, including Puerto Rico, the U.S. Virgin Islands, and several South American countries, such as Paraguay, Chile, Bolivia, and parts of Brazil. Venezuela used AST until December 9, 2007, when it switched to UTC-4:30, but switched back to AST on May 1, 2016, at 2:30 a.m. local time.

All content from Kiddle encyclopedia articles (including the article images and facts) can be freely used under Attribution-ShareAlike license, unless stated otherwise. Cite this article:
Atlantic Standard Time Zone Facts for Kids. Kiddle Encyclopedia.