The tiger shark (Galeocerdo cuvier) is a species of requiem shark, and is the only member of the genus Galeocerdo. This is one of the largest known species of shark. It reaches lengths of up to 5.5 metres (18 feet), and weighs over 900 kg (2000 pounds). The tiger shark is found throughout the world's coastal temperate and tropical waters, with the exception of the Mediterranean Sea, and have been known to swim to depths of up to 350 metres (1150 feet). Tiger sharks feed mainly on bony fish, rays, squid, crustaceans, seals, and dolphins. The tiger shark is the only species in its family which is ovoviviparous, giving birth to 10-82 pups at a time. 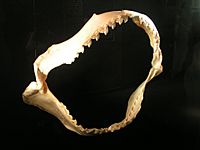 The jaws of a tiger shark

The jaws of the tiger shark have large, sharp teeth which helps the shark to cut through the flesh and bones of their prey. Each tooth is jagged around the edges. The upper and lower teeth are similar in shape, and the teeth at the front are larger than the back teeth.

A young tiger shark in the Bahamas

The tiger shark is nocturnal. During the day they are mostly inactive, and they hunt during the night. They are solitary, and may attack any shark or human that comes near them. The Tiger shark can be very aggressive, and along with the great white and the bull shark, it is one of the most dangerous sharks for humans.

Tiger sharks have a wide variety of prey. They feed on rays, bony fish, dolphins, carrion, sea birds, sea turtles, sea snakes, crustaceans, seals, squid, and small sharks of other species. Some Tiger sharks have been found with ship garbage, and car license plates in their stomachs. Adult tiger sharks have also been known to prey on young tiger sharks.

One large female caught off the north end of the Gulf of Aqaba in the Red Sea had two empty cans, a plastic bottle, two burlap sacks, a squid, and a 20 cm long fish in its stomach. Also, many tiger sharks caught in harbours have been found with garbage in their stomachs.

Tiger sharks are able to find food in the dark by picking up the vibrations made by their prey in the water, and also because of their enhanced vision.

For the tiger shark, maturity depends on size and not on age. Males reach maturity at 2.3-3 metres (8-10 feet), while females become mature at 2.5-3.3 metres (8-11 feet).t Tiger sharks are ovoviviparous, and females only mate once every 3 years. The time of which the mating season occurs depends on the location. In the Northern Hemisphere the mating season lasts from March until May, and in the southern hemisphere the mating season lasts from November until January. The gestation period lasts up to 16 months, and females can give birth to 10-82 pups at a time. The average lifespan in the wild for a tiger shark is 12 years.

The tiger shark is second on the list of number of recorded attacks on humans, with the great white shark being first. Fortunately though, attacks are rare. In Hawaii, although tiger sharks were responsible for several deaths in the 1990s, there is an average of one shark attack per year.

Due to being fished commercially and recreationally, in some parts of its range, the tiger shark's population has decreased. Like many shark species, the fins of the tiger shark are highly prized in Asia for making shark-fin soup. Also, its meat is eaten by people, its skin is used to make leather, and its liver is taken as a source of Vitamin A. Fortunately, this species is quite fast growing and produces large numbers of young, so the tiger shark faces no real threat. Also, in areas where the numbers of adults have been reduced due to fishing, young tiger sharks have been found to be more common, as predation from the adults is lessened. Nevertheless, as the demand for shark fins continues to grow, there is concern that it could have a serious impact on this species in the future. The tiger shark is listed as Near Threatened by the IUCN.

All content from Kiddle encyclopedia articles (including the article images and facts) can be freely used under Attribution-ShareAlike license, unless stated otherwise. Cite this article:
Tiger shark Facts for Kids. Kiddle Encyclopedia.