Aquarium of the Pacific facts for kids

The Aquarium is an accredited member of the Association of Zoos and Aquariums (AZA).

The Aquarium features a collection of over 11,000 animals representing over 500 different species in exhibits ranging in size and capacity from about 5,000 to 350,000 gallons. Exhibits introduce the inhabitants and seascapes of the Pacific, while also focusing on specific conservation messages associated with each region. The Pacific Ocean is the focus of three major permanent galleries, sunny Southern California and Baja, the frigid waters of the Northern Pacific and the colorful reefs of the Tropical Pacific. 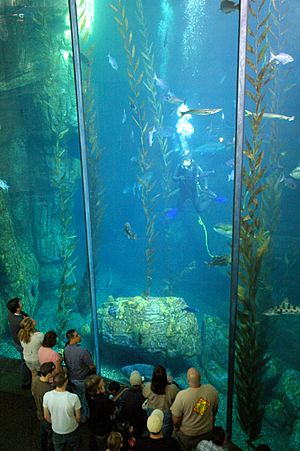 A diver addressing a group of visitors using a specially adapted mask in the Blue Cavern exhibit.

The Southern California & Baja Gallery features the varied habitats of this region. The first exhibit is the 142,000-US-gallon (540,000 l) three-story Blue Cavern tank, which houses animals that live in the waters surrounding nearby Catalina Island. Next is the Amber Forest exhibit, which replicates a Giant kelp forest with Garibaldi, California scorpionfish, and other representative organisms. The Gulf of California exhibit houses Cortez rainbow wrasse, Mexican lookdowns, Porcupine fish, and others. Other areas of the gallery include the 211,000-US-gallon (800,000 l) Seal and Sea Lion Habitat, Ray Touch Pool, and Shorebird Sanctuary.

The Northern Pacific Gallery focuses on organisms from the Bering Sea. Exhibits include the Sea Otter Habitat, home to southern sea otters; the giant Pacific octopus tank; and Diving Birds, where puffins and auklets live. Other species on display include Japanese spider crabs, jellyfish, and sea anemones.

The Tropical Pacific Gallery exhibits animals off the coast of the islands of Palau and has the aquarium's largest tank, the 350,000-US-gallon (1,300,000 l) Tropical Reef Habitat. This tank houses olive ridley sea turtles, zebra sharks, and many other species. Elsewhere in the Gallery are big-belly seahorses, leafy seadragons, weedy seadragons, and sea kraits. 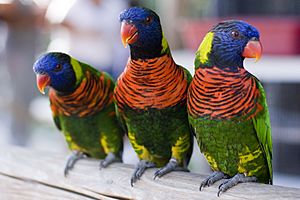 Three Rainbow Lorikeets at the Aquarium

The Lorikeet Forest walk-through aviary covers 3,200 square feet (300 m2) and houses five subspecies of rainbow lorikeet as well as the violet-necked lory. Guests may feed them small amounts of nectar for a fee.

This exhibit for the Magellanic penguin opened in May, 2012. An underwater crawl-in space allows guests to view the penguins from within the tank.

In spring 2010, the Aquarium opened a new 4,700-square-foot (440 m2) Earth-Friendly Garden on its front lawn. The garden features California native and drought-resistant plants, as well as a very efficient irrigation system, to show part of the solution to Southern California's ongoing water shortage problems.

Activities of the Aquarium of the Pacific employees and volunteers extend far beyond exhibits. The diverse marine science and conservation ventures include: breeding and conservation programs for endangered marine animals and habitats; housing of unreleasable seals, sea lions, and sea otters from local care centers and marine parks; beach and habitat cleanups; a variety of green business practices; and continuing efforts to educate visitors on the importance the ocean, its threats, and conservation, including the hazards of marine pollution, over-harvesting, habitat destruction and global climate change. One example is a trashion festival with works by Marina DeBris educating about ocean pollution.

The Aquarium architecture is inspired by the towering, breaking waves of the Pacific and mirrors the fluid and dynamic temper of the ocean. Kajima International, developers of the world's most critically acclaimed and technologically advanced aquariums, was the developer of the Aquarium of the Pacific and architects included the Los Angeles office of Hellmuth, Obata & Kassanbaum and Esherick Homsey Dodge and Davis of San Francisco. Construction was a joint venture of Turner Construction Company and Kajima International. On June 20, 1998, construction was completed and the Aquarium opened to the public.

All content from Kiddle encyclopedia articles (including the article images and facts) can be freely used under Attribution-ShareAlike license, unless stated otherwise. Cite this article:
Aquarium of the Pacific Facts for Kids. Kiddle Encyclopedia.