The Japanese spider crab (Macrocheira kaempferi) is a species of marine crab, and is the only member in the genus Macrocheira. It is found only in the waters around Japan. The Japanese spider crab has the largest leg span of any arthropod in the world, reaching up to 3.8 meters (12 ft) long, and weighing up to 41 pounds (19 kg). It is the subject of fishery and is considered a delicacy. 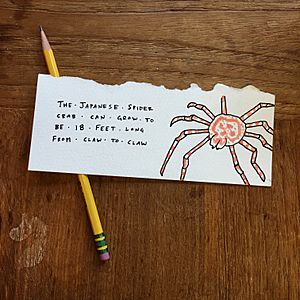 The Japanese spider crab has the largest leg span of any arthropod in the world, reaching up to 3.8 meters (12 ft) long, and weighing up to 41 pounds (19 kg), but the actual body of the Japanese spider crab is only 15 inches long. It has 8 legs and 2 arms used for feeding. Each feeding arm is 1.5 meters (5 ft) long. It is orange in colour, with white spots on its legs. Although this crab has some ferocious appearances, it is actually known to be very gentle towards others.

Their armored exoskeletons help protect them from larger predators such as octopuses, but giant spider crabs also use camouflage. The crab's bumpy carapace blends into the rocky ocean floor. To further the illusion, a spider crab will adorn its shell with sponges and other animals. 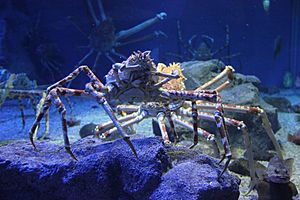 It is found in the Pacific side of the Japanese islands, Konshu and Kyushu. They are found usually in the Sagami, Suruga, and Tosa bays, as well as off the coast of the Kii peninsula. However, a Japanese spider crab was once found as far south as Su-ao, in eastern Taiwan. This is most likely a one time event; it is possible a fishing trawler or extreme weather may have carried this individual much further south than its home range. The Japanese spider crab is found up to the depths of 2,500 feet (750 meters).

The Japanese spider crab is an omnivore, consuming both plant matter and animals. It also sometimes acts as a scavenger consuming dead animals. Some have been known to scrape the ocean floor for plants and algae while others pry open the shells of mollusks. 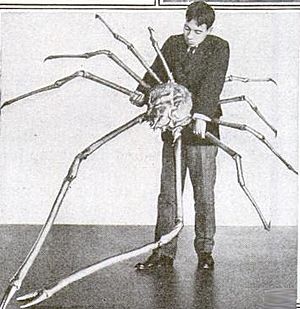 This crab specimen from the American Museum of Natural History measures 3.8 metres (12 ft) across its outstretched legs

Female crabs carry fertilized eggs attached to their abdominal appendages until they hatch into tiny planktonic larvae. They can lay up to 1.5 million eggs per season, and these eggs will hatch in 10 days on average.

Once hatched, these larvae undergo four stages of development before they mature into adulthood. The first, or prezoeal stage lasts only a matter of minutes, with most molting within 15 minutes to enter the first zoeal stage. They look very different than their parents at this stage, with small, transparent bodies. Macrocheira Kaempferi undergoes two zoeal stages and a megalopa stage before it reaches adulthood. Each of these stages is influenced greatly by temperature, both in terms of survival and stage length. It is thought that the optimum rearing temperature for all larval stages is between 15 °C and 18 °C, with survival temperatures ranging from 11 °C to 20 °C. At these temperatures the zoeal stages can last anywhere from 7 to 18 days, with the megalopa stage lasting anywhere from 25 to 45 days. Colder water is associated with longer durations in each stage. During the larval stages, Macrocheira kaempferi is found near the surface as the planktonic forms drift with ocean currents. This surface water ranges between 12 °C and 15 °C during the hatching season (January to March). This is much warmer than the waters at depths below 200m where adults are found, with waters steadily around 10 °C. Optimal temperatures see a 70% survival through the first zoeal stage which is greatly reduced to a 30% survival in the second zoeal and Megalopa stages.

All content from Kiddle encyclopedia articles (including the article images and facts) can be freely used under Attribution-ShareAlike license, unless stated otherwise. Cite this article:
Japanese spider crab Facts for Kids. Kiddle Encyclopedia.