It usually lives at depths around lseters hey have also besSeven-arm octopus (Haliphron atlanticus). Adults usually weigh around 15 kg (33 lb), with an arm span of

They mostly eat crabs, shrimp, abalone, fish, and shellfish like scallops, clams, and mussels. In aquariums, they have been seen eating spiny dogfish (Squalus acanthias), a type of shark 3-4 feet long. Food is grabbed with its sucy rs and then crushed using its tough beak of chitin. North Pacific giant octopus are eaten by harbor seals, sea otters, and sperm whales. They usually live about 3-5 years in the wild. 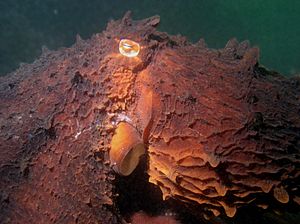 Close-up of E. dofleini showing the longitudinal folds on the body and the paddle-like papillae 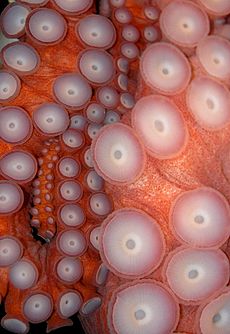 All cephalopods have bilateral symmetry, a shell gland, a mantle, and a well-developed head with sucker-covered arms.

The octopus has eight arms, each of which has two rows of suckers. Many of the suckers are lined with papillae or hooks for adhesion. The web between the arms can be expanded to form a parachute-like structure to capture prey.

In the center of the arms is a mouth, containing beak and radula (toothed-tongue).

Cephalopods have a paralytic and digestive toxin in two salivary glands to aid in opening prey. Water is pulled into the mantle and over gills or lamellae for oxygen uptake, and can be ejected forcefully through the siphon for jet propulsion.

They are able to reach speeds up to 40 km/h (25 mph) for short sprints. They tend to use their arms as legs, and slowly crawl along the bottom. The siphon is also used to expel ink for escaping predators. The entire body of the octopus is compressible, so they are able to fit through any opening slightly bigger than the size of their beaks (the only hard part of their bodies). Their arms are muscular hydrostats, which lengthen, contract, and contort. Octopuses are poikilothermic or cool-blooded, and have three hearts and blue, copper-based blood.

The mantle of the octopus is spherical in shape and contains most of the animal's major organs. By contracting or expanding tiny pigment-containing sacs within cells an octopus can change the color of its skin, giving it the ability to blend into the environment.

They prey upon shrimp, crabs, scallop, abalone, cockles, snails, clams, lobsters, fish, and other octopuses. Food is procured with its suckers and then bitten using its tough "beak" of chitin.

Scavengers and other organisms often attempt to eat octopus eggs, even when the female is present to protect them. Giant Pacific octopus paralarvae are preyed upon by many other zooplankton and filter feeders. Marine mammals, such as harbor seals, sea otters, and sperm whales depend upon the giant Pacific octopus as a source of food. Pacific sleeper sharks are also confirmed predators of this species. In addition, the octopus (along with cuttlefish and squid) are major sources of protein for human consumption. About 3.3 million tons are commercially fished, worth $6 billion annually. Over thousands of years, humans have caught them using lures, spears, pot traps, nets, and bare hands. 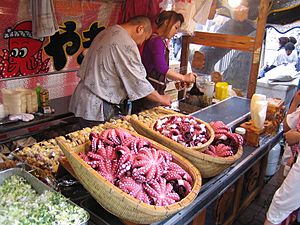 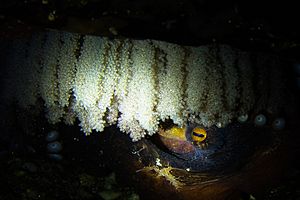 The giant Pacific octopus is considered to be long-lived compared to other species, with lifespans typically 3–5 years in the wild. Many other octopuses go through a lifespan in one year, from egg to end of life. To make up for its relatively short lifespan, the octopus is extremely prolific. It can lay between 120,000 and 400,000 eggs which are intensively cared for by the females. The female stops eating during this care and her life ends soon after the eggs hatch.

Eggs are coated in chorion, and the female attaches the eggs to a hard surface. She continuously blows water over the eggs, and grooms them to remove algae and other growths.

Eggs hatch in about 6 months. Hatchlings are about the size of a grain of rice, and very few survive to adulthood. Their growth rate is incredibly high. Because they are cool-blooded, they are able to convert most of consumed energy into body mass, respiration, activity, and reproduction.

Hectocotylus arm of an octopod

Giant Pacific octopuses are semelparous; they breed once before death. 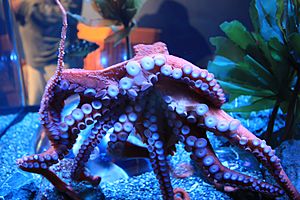 Octopuses are ranked as the most intelligent invertebrates. Giant Pacific Octopuses are commonly kept on display at aquariums due to their size and interesting physiology, and have demonstrated the ability to recognize humans that they frequently come in contact with. These responses include jetting water, changing body texture, and other behaviors that are consistently demonstrated to specific individuals.

They have the ability to solve simple puzzles, open childproof bottles and use "tools". The octopus brain has folded lobes (a distinct characteristic of complexity), visual and tactile memory centers. They have about 300 million neurons.

They have been known to open tank valves, disassemble expensive equipment, and generally wreak havoc in labs and aquaria. Some researchers even claim that they are capable of motor play and having personalities.

All content from Kiddle encyclopedia articles (including the article images and facts) can be freely used under Attribution-ShareAlike license, unless stated otherwise. Cite this article:
North Pacific giant octopus Facts for Kids. Kiddle Encyclopedia.