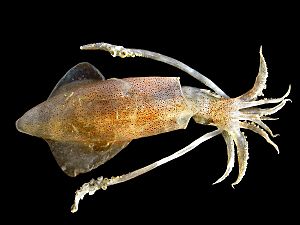 European Squid (Loligo vulgaris). The mantle is all that is visible behind the head: the outer body wall and the fins are all part of the mantle. 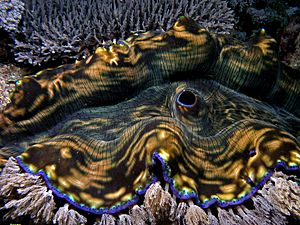 The brightly coloured mantle of this Giant clam is showing.

The mantle is a significant part of the anatomy of molluscs: it is the dorsal body wall which covers the organs of digestion, reproduction and movement.

In many, but not all, species of molluscs, the epidermis (skin) of the mantle secretes calcium carbonate and conchiolin, and creates a shell.

The word mantle means cloak or cape, and does often resemble a cloak. The edges of the mantle may extend far beyond the main part of the body, forming flaps, double-layered structures adapted for many different uses, including for example, the siphon.

The mantle cavity is a central feature of molluscan biology. This cavity is formed by the mantle skirt, a double fold of mantle which encloses a water space. This space contains the mollusc's gills, anus, and organs for taste, excretion and reproductive organs.

The mantle cavity functions as a respiratory chamber in all molluscs. In bivalves it is usually part of the feeding structure. In some mollusks the mantle cavity is a brood chamber, and in cephalopods and some bivalves such as scallops, it is a locomotory organ.

The mantle is highly muscular. In cephalopods the contraction of the mantle is used to force water through a tubular siphon, and this propels the animal rapidly through the water. In other molluscs, it is used as a kind of "foot" for locomotion.

All content from Kiddle encyclopedia articles (including the article images and facts) can be freely used under Attribution-ShareAlike license, unless stated otherwise. Cite this article:
Mantle (mollusc) Facts for Kids. Kiddle Encyclopedia.