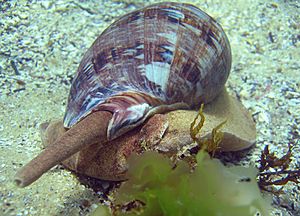 The siphon of a large carnivorous marine volute, Cymbiola magnifica 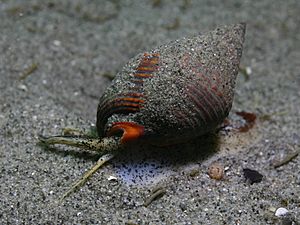 The sea snail Nassarius tiarula is a scavenger. Siphon on the left

A siphon is a long tube-like structure that is present in certain aquatic molluscs: Gastropods, bivalves, and cephalopods. The tube is used for the exchange of liquids, or air. This flow can have different purposes, the most common are breathing, locomotion, feeding and reproduction.

The siphon is part of the mantle of the mollusc, and the water flow is directed to (or from) the mantle cavity.

A single siphon occurs in some gastropods. In those bivalves which have siphons, they are paired. In cephalopods, there is a single siphon or funnel which is known as a hyponome.

All content from Kiddle encyclopedia articles (including the article images and facts) can be freely used under Attribution-ShareAlike license, unless stated otherwise. Cite this article:
Siphon (mollusc) Facts for Kids. Kiddle Encyclopedia.